I have an especially rubbish hairstyle. Indeed, we are seriously stretching the patience of even the most liberal of lexicographers when using the word "style" in relation to my barnet. I would illustrate this with photographic evidence, but suddenly I've gone all shy. There's one on the website listed to your right, if your nervous system is up to it.

My problem is that I don't like having short hair. Most blokes thrive on the convenience of either a simple spiked or parted style, or go further with the electric razor every other month. Manageable? Yep. But that's a word which is used on shampoo ads, and in shampoo ads only women are ever featured, and they are never women with hairstyles like that of Yazz or Rhona Cameron. They have long, flowing, "healthy-looking" (ie, not split or falling out) hair. I want that hair too.

I let it grow very long ten years ago. It was scruffy at times, but when I had it trimmed and tidied and then made the effort it looked okay. I was single and found that hair was a good subject to bring up when chatting to women. Most of the girls I briefly liaised with in the late 1990s had shorter hair than me; annoyingly the one I liked the most prior to meeting the Natural Blonde was the one who disliked my hair the most.

The Natural Blonde's predecessor dumped me (for hair-unrelated reasons) in the summer of 2000 and immediately I decided on a fresh start, implausibly telling myself that having my locks snipped away would somehow mend my punctured ego and mildly grazed heart, consequently restoring my faith in womankind. I got together with the Natural Blonde within a month, and we're still together now. For the lion's share of that period I have forced myself into sensible hairdos.

I had a smart, short haircut on our wedding day last year and have refused to have anything more than cursory trims ever since (the type which hair experts say you need to keep it in good condition). Trouble is, only one section seems to be really growing and I'm forever nipping to the barber to make sure I don't look like the sax player from Spandau Ballet at the time of the Parade album. I want the sides and scalp to grow so I can have the option of ponytailing; instead I end up in serious mullet danger and this needs to be halted.

The fellows with whom I attend football matches mercilessly ridicule me over my hair. Then there are two of my closest friends in radio, Wesley and Alex, who have fabulous long locks and I frequently mutter jealous comments at them when they are out of earshot (Wesley is my age and has not had anything resembling a haircut for 16 years, and looks irritatingly fabulous). At my 80s Night in Stockport, the bar staff and half the regulars aim the line "how your hair is beautiful" from Blondie's Atomic at me with immeasurable sarcasm whenever I choose to play it. Lately The Tide Is High has received preferential treatment from me...

The male bar staff even dressed as me to join in a group of regulars' 80s party lately - the punters came as Madonna (bangles and fishnets), George Michael (CHOOSE LIFE T-shirt, wide shades) etc; the bar staff all bought semi-mulleted wigs in my alleged honour and wore them for six solid hours. I was flattered, and nothing else.

Few people have anything complimentary to say about my hair. The Natural Blonde moans about it constantly (and my mother hates all men with long hair) so the two most precious women in my life are in despair of me. The snoring next to me at night suggests that the Natural Blonde isn't losing sleep over my trichological shambles, and her double standards come to the fore when we watch Top Gear on telly.

Not only has James May re-grown his hair to her partial approval, but now Richard Hammond, the favourite male famous person of the Natural Blonde (apart from Michael Ball, the injustice of which is worth its own blog but I'm not writing it) is beginning to sprout extra locks (although there isn't a photo on the web yet to prove this; the one enclosed is illustratively useful only). It's styled, it's neat, it has a direction to go in and he looks annoyingly suited to it. The reaction from next to me on the settee was one of snorting derision; when I said I could look like that, she laughed and said it was impossible. It suited him, it wouldn't suit me, get it cut. 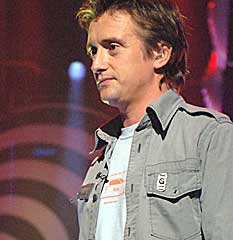 I tried to explain that if I had three hours in a stylist's caravan prior to a television broadcast I'd be as handsome and attractive, with elongated hair, as Hammond. The reaction was even more dismissive. And down I sank into the cushion, waiting for the Star in the Reasonably Priced Car and hoping it would be somebody with poor barnetry habits. It was Helen Mirren.

I intend to pursue my quest for a return to hair of both length and neatness. I have done this before with success and, well, I'm doing it because I'm worth it, to coin a predictable phrase - sorry about that.

Oh, and any spelling errors are because my hair fell into my eyes. Sorry about that too.
Authored by Matthew Rudd
Email ThisBlogThis!Share to TwitterShare to FacebookShare to Pinterest

call me wierd if u wannu but he is! xxSEXYxx