As I started this blog with stuff about my dogs, I thought I'd better complete my foolhardy menageric picture by mentioning the feline branch of the household. And a substantial branch it is too; substantial in number, manipulative power and general luxury.

I was brought up with cats, although the family record of keeping "fuskers" when I was a lad wasn't initially great. The first, a loveable black and white RSPCA rescue cat called Bonnie, was run over at just six months and is buried in my parents' garden. The second, a fiercely independent white and black Cats Protection animal called Lucy, disappeared also at six months to live her own life, never was she a settled pet, and attention from humans was rarely welcome. My mother was upset at a second loss so soon after the first and vowed not to have another.

Then she walked past our local pet shop one day, and there were two tiny black kittens in the window. My mother's resolve evaporated instantly and she went in to buy both; she came out with one, as the other had been pre-ordered. This cat never really developed a name but became a fine pet, as independent, bloody-minded cats go, and when she died in 2005, she was 19 years old. She's buried next to Bonnie in the garden.

I never owned my own cat in adulthood until I met the Natural Blonde and she moved into my home. With her came a silvery, skinny but perfectly affable house cat called Twizz, who was her pride and joy. Twizz talks to her (she can actually say the Natural Blonde's name during the night, it's really eerie, although the name in question lacking distinctly in hard consonants does help, so none of that manual manipulation of the mouth is required, a la the That's Life "sausages" mutt of the 1980s) and is generally mouthy when you ask her to get off a settee or chair - she yells at you, often without being arsed to open her eyes. Not that you want her to get down; there's just an idle, mediocre sport to be had in making a cat talk to you when the majority of them have little human contact urges unless hungry or in need of strokes. 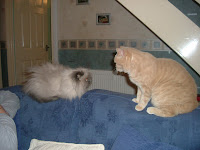 The breeder of our Bassets also breeds cream short-hair cats, and one day - for a reason I genuinely can't remember - we decided to invest in one of them. So, home with us came an oversized, permanently scared thing called Harvey (as in cream, although the kennels aren't in Bristol) who makes tooting noises as he runs past you and is an equivalent of Bentley the Basset, in that he's the biggest and heaviest (we got him on the bathroom scales once and he weighed in at exactly a stone), and yet also the scarediest. But even allowing for his permanently panic-stricken disposition, he is often the one happily lying next to you on the bed when you open your eyes in the morning. The picture is of Twizz and Harvey.

We went on holiday a few months after Harvey had settled in. The dogs went to kennels but we kept the cats at home, as they're not outdoor animals and therefore we just needed a kindly neighbour to be on food, water, stroking and tray duty. We were blissfully assured on the telephone by our neighbour that all was well even as we reached the ferry terminal, only to get home and realise that Harvey was absent entirely.

My father had been refitting our bathroom and had left a large hole in the bathroom floor for plumbing reasons. Despite meticulous checking each day, Harvey had managed to get into this hole. Unfortunately, his utterly petrified disposition meant that he wouldn't budge when either father or neighbour made cooing noises to get him out, and therefore nobody had anything foolproof to suggest he was actually there.

We got home, couldn't retrieve him and started to wonder whether he had escaped the house while stuff was being brought in and out on a daily basis by my father. The Natural Blonde was frantic; the neighbour was distraught and I found myself wandering the village looking for a cat who could have been gone for days. The neighbour said she had spent whole evenings laid on the bathroom floor, verbally beckoning Harvey from the hole, but had no idea whether he was actually in there.

We'd just started to believe he'd left the house and our lives forever when Twizz, who had no reason to like Harvey as he'd taken some of her attention, went upstairs. We then heard three or four of her screeching yowls of the Natural Blonde's name, before she came downstairs to rejoin us. Immediately, a noise came from the ceiling above us and we ran like Donovan Bailey up the stairs, just arriving at the bathroom in time to see Harvey's head pop out of the hole.

So where humans failed, an ageing cat of no real companionship to her fellow feline succeeded straightaway.

Back to the kennels we went a few months later to collect Oliver, an eight week old cream kitten, lighter in colour than Harvey, who immediately became the bigger cat's new playmate. This was some achievement, as Harvey was a massive animal but he was so remarkably gentle and patient with his little pal's playing habits that it was a joy to watch. The two would sleep next to one other, often collapsing into each other's paws, until Oliver grew up and began to assert his independence around the house.

Then along came Sox. This was a different proposition, as Sox was an adult female black and white cat with no medical records (although the vet said she'd had a litter of kittens previously) and a difficult personality who we took on from the Natural Blonde's cousin after she had moved into a house which didn't allow pets. Sox - whose name came from the regulation white paws on black legs scenario - had been found abandoned in her previous house, laid on newspaper in a locked room. Had the Natural Blonde's cousin not moved in and found her, the poor girl would have starved to death. As a consequence she was a less than trusting sort, although she was good with the two kids who adopted her. When she came to us, she seemed grateful not to have children constantly picking her up (which she hates) but was not enamoured by sharing a home with three other cats. She still refuses to socialise with them and is prone to batting any or all with a sharply clawed paw when one gets too close. Only Twizz gets the first punch in, and Sox knows she's boss cat. The expression "Sox, don't hit him" is commonly heard in the house. 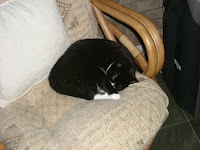 When my Private Eye pops through the letterbox, or the local free paper is delivered, Sox will commandeer it. She'll lay on it, then roll on her back and stay in that position. She finds newspaper somehow comforting and soothing as it was all she had during those awful hours and days when she had been abandoned as her home changed hands.

That should have been it, really. Four cats to go with the four dogs. Then, when the Natural Blonde did her last stint as weekend cover for the kennel owners in Lincolnshire, she was offered another cream kitten as part-payment. She said no.

Then, after speaking to me, she said yes. So Sidney, our newest recruit, is my fault.

Sidney is identical to Oliver except is considerably more adept at being a pest. He doesn't seem to want to grow out of eating carpets, knocking over bins and doing that strange bed-making act with his claws on our clothes whenever we are in bed or in horizontal positions on the two settees. He is a very loving kitten, but tremendously hard work. He is also very selfish (he kicks a sleeping Oliver awake to play with him, and the unflappable Oliver responds by giving the youngster a wash) and very jealous (stroke another cat for any length of time and he's in, pushing his head through the tiniest gap). Sidney's on the left of this settee pic, Oliver on the right. 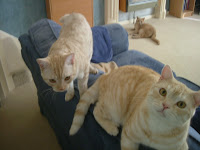 Sidney also brought a bug into the house when we first took him home, the sort of bug which cats don't get injected against. Only Twizz didn't get a bout of sneezes and as such, four lots of tablets were acquired from the vet, with the credit card taking a mild pounding. Now, given that Sox largely hates attention anyway, and certainly hates being physically handled, you can imagine the difficulties with tableting her. Harvey, Oliver and Sidney took their pills in the traditional force-mouth-open, rub-throat manner without issue or complaint (although the panic-stricken Harvey took some getting from under the bedside table when he heard the rattle of the bottle).

Sox, however, has perfected the art of a) scratching humans who try to cure her; and b) hiding the pill in her mouth and doing 'pretend' swallowing actions until the human has let her go, then spitting out the pill. The Natural Blonde can force medication down even the most obstinate of feline throats, but I can't. In Sox's case, it was about me on this occasion when the expression "Sox, don't hit him!" was heard.

So now the full story is told; four dogs, five cats, the Natural Blonde and me. People think we're insane to be surrounded by and be responsible for so many animals, but our response is always the same - five cats and four dogs take less looking after than one child, and not one of our beloved pets require new trainers every six weeks nor harbour ambitions to go to university ... with financial help from their parents. As long as the Pro Plan, Kitekat, Wagg and Pal supplies are stocked up, it's a happy and entertaining household.
Authored by Matthew Rudd
Email ThisBlogThis!Share to TwitterShare to FacebookShare to Pinterest

And what beautiful dogs.

There are idiots who say you can't love both cats and dogs. Spurn them.