"They are not bloody sausage dogs!"

I must use that expression every single day, either with the mild expletive removed in polite conversation, or in thought, or muttered under my breath.

Four boisterous but utterly beautiful Basset hounds live in the grounds of chez Rudd. It was always the caninic ambition of the Natural Blonde to own one if she were ever to become mummy to a dog after she met me. At that time, I had an old and wonderful Sheltie-cross called Paddy, who I'd taken on in his retirement years because the lady who had brought him up was suffering more and more with MS (or something else with initials). When he died, we mourned him for a short while and then began the Basset hunt.

Any dog owner will tell you that after the demise of their pet, the gap left behind is extraordinary. It hits you harder than non-animalists will ever get their head round; you find yourself, in the case of a dog, putting away now needless bowls and blankets and getting photos framed and placed in the areas where your parents may be. Paddy remains on top of my lounge bookcase to this day. And part of the process of grieving is not to replace (impossible), but certainly to fill the gap. And so we got Penny. The photo is of my beautiful Penny. 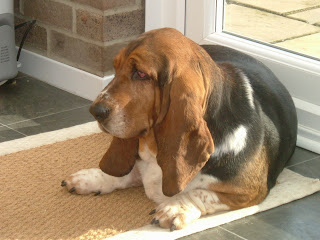 Bassets aren't the most obvious pets among the dog family. Aside from that cartoon malingerer in the Daily Mail and that one in Dukes of Hazzard, there hasn't been a lot of media representation of the breed over the years. Sara Cox has got one and was often papped walking him, but nobody ever paid any attention to the actual dog. The Beckhams bought one, and the Natural Blonde is frantic with worry about where he is now after Dave and Vicky got the Pickford's men in and went to Spain, and now Los Angeles. There was one in the Beale family in EastEnders for a while, but as is often the case in Albert Square, continuity let it down and the dog hasn't been seen or mentioned since pretty much the week it was introduced.

All this means that rarely will you ever see them advertised privately. The breed by nature is pedigree and high quality, and therefore initially expensive, so people choose to have one in advance rather than pick one by accident. If someone purchases a Basset or similarly high-reaching breed and then can't keep it, for whatever reason, they tend to just sell it back to the breeder at a loss and the breeder then uses their substantial contacts to re-home. We didn't know any of this at the time, but nonetheless there was a female Basset, a year old, in the Dogs section of the Hull Daily Mail the day we decided we were ready to get Paddy's old bed and bowls out again (but yes, we did invest in new ones). By the same evening, money and certificates had changed hands, and the Natural Blonde was bringing Devil In Disguise (kennel name - her litter was named after Elvis Presley songs) home with her. The family sold her because they'd been initially unable to have a baby and bought her as a substitute, then a totally unexpected pregnancy meant that both baby and dog were suddenly present, and dog missed out entirely. She ended up in a cage in the kitchen - not mistreated, but certainly understimulated and underexercised, bless her. They had given her the pet name of Pagan, for reasons connected to the kennel name, but she didn't quite seem enough of a devotee to Beelzebub for us to be convinced. She deserved a more familiarly girly name, so she became Penny.

With her came her documentation, and the Natural Blonde went off on a crusade which has kind of lasted to this day. She contacted the Lincolnshire kennels, introduced herself, nipped across the Humber Bridge to say hello, and over the next 12 months we had somehow recruited two more Bassets from them, loosely related to Penny. Private Benjamin (litter named after fictional soldiers) came first, an eight-week old puppy with the classic Basset "knackered and content" look whom Penny would come to mother, and then Blackjack (litter named after casino life), an over-long male with the world's dirtiest ears and scarediest disposition. They became Ruby and Bentley (the picture here is of Bentley) respectively. Ruby's first major contribution to the household was to eat an entire settee.

That is not a joke. 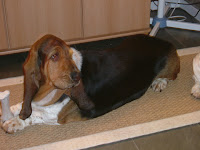 The walking process with Bassets is tough, as they are so individualised that you need eyes not just in the back of your head, but also in your legs, ears and any other bodily point which makes up a 360 degree line of sight. This became more urgent when Boris joined us. Boris, dear Boris. Best Mate is his kennel name (litter named after Cheltenham Gold Cup winners) and he is nothing like the others. He just took over the whole set-up. At this point, the Natural Blonde and I took the decision to re-house them; from the conservatory to the garage, which we'd had halved, fitted with hatches and doors, tiled, heated, and equipped with comfy beds and other doggy home-from-home gubbins. Honestly, we didn't put so much effort into refurbishing our own bathroom.

Boris is the loudest, naughtiest and toughest of the four; he reacts to other dogs less well, while the other three are all of the wag 'n' sniff variety. But he is ridiculously forgivable, as are they all. And now, with Penny at seven years of age and Boris at three, they are established around the village. Their twice daily walks prompt the same reactions - car drivers and passengers take their eyes off the road; drivers stare, passengers point and even through the more darkened windscreens you can lipread the words "Look at them dogs!" easily. And the local kids flock to us, asking all sorts of questions. But, really, "they are not bloody sausage dogs"! We get that all the time. They've been labelled as spaniels too, which makes me wonder exactly what sort of mutant spaniels are being secretly bred in our village. The four of them know their power - their look, laconic nature and almost appealing tendency to take not a blind bit of notice of anything I say amuses the locals. I should charge a fee, especially when all four of them choose to simultaneously roll on their backs. I'm sure they concoct that plan together in the privacy of their garage at night. When all four are off the lead, Boris (on the right here) runs ahead while Ruby (on the left) chooses not to run at all, but stand still and sniff each blade of grass in turn. And when two run off in opposite directions, you have a serious decision to make as to which one to chase. It's like being on Scruples. 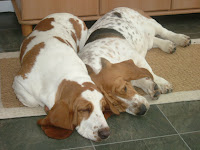 Four is more than enough; despite one cantankerous, lifeskill-lacking neighbour's constant complaints the dogs are well behaved, sillily spoilt and deliriously happy in their boudoir. They never enter the house now except at bath time, and as we have cats too (who never go out) the two conflicting factions only see each other with panes of glass separating them. Nose to nose. That said, when escapee Bassets have made it into the house, it tends to be they who are afraid of the cats rather than vice versa. A cat's clawed slap can really dent a dog's pride, as well as its nose.

We've made a point of checking the local paper for Bassets regularly, not knowing what we'd actually do if one ever appeared, and we can count on one hand the number that have been advertised in the six years since we acquired Penny that very way, proving how fortunate we were to have made that decision to look when we did. There was one, however, just last week, and we simply can't have it. No room, possibility of upsetting the harmony between the four, plus the obvious extra expense with vets et al. So much do I adore this breed that I found myself texting friends in the vicinity asking if they wanted a dog (and, erm, did they have £550 to spare). Reason for sale, according to the ad, was an allergy, which is one step up from "we've got a baby and can't be arsed with the dog" which is what we got from Penny's previous owners. The Basset in question was female and eight months old, only a little younger than our Penny was in autumn 2001. It breaks my heart that I can't have her.

If you want a Basset hound, the worthiest way is through the Basset Hound Welfare, who are wonderful. They are constantly re-homing abandoned or unwanted Bassets, and several times a year associated folk and their luxuriantly-eared pooches meet up for long walks in renowned beauty spots; the reaction of Sunday walkers at Bolton Abbey or on Goathland's former railway line when they see 30 or so Bassets leading their way is always a joy to behold. We've even been asked if we're on a hunt - Mr Fox would be perfectly safe if so. No self-respecting Basset hound would follow a fox's scent when the more acceptable aroma of discarded sandwich or dead bird is encompassed by those lugs; lugs which the evolutionary process designed to capture and hold the scent back in 16th century France. And they're slower than even me; Mr Fox only needs to have working legs and he's away.

Basset Hound Welfare can be found here and there will be equivalents outside the UK - congratulations in advance on your choice of pet. Keep an eye on your settee.
Authored by Matthew Rudd
Email ThisBlogThis!Share to TwitterShare to FacebookShare to Pinterest

Adorable creatures. As for the sort of people who rehome their dogs when they get a baby, when Mrs B and I are blessed with issue, we're planning to let the dog get on with most of the day-to-day childcare. If a child grows up as well-adjusted and delightful as Lyttelton, that's a good start in life.

Thank you for taking some time to write this post. The basset hound is a dog breed that was made for hunting small game, such as rabbits. They are still used for this purpose in many parts of the United States, but when he’s not chasing bunnies, he can be seen lying on the couch, being a couch potato. He’s known to be great with kids, and his lovably amusing face will make anyone smile. See more http://dogsaholic.com/breeds/profiles/basset-hound.html