"Sign here for my grown-up friend who should know better..." 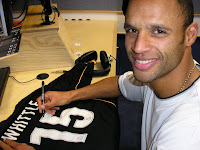 This is former Hull City captain Justin Whittle, one of the club's all-time heroes, signing an old replica shirt for a friend of mine this week.

My mate is 22, an intelligent undergraduate (no asides about contradiction, please), a holder of two gold cards and a largely sane, sober (well, in terms of his disposition, as opposed to his blood alcohol measurement), ambitious, worldly-wise and normal human being.

Mention the name of Justin Whittle to him though and he turns into a gibbering wreck. Imagine the equivalent of a tartan turn-upped teen lass waiting for the Bay City Rollers to come out of the fire exit at some venue in 1975. This is the effect Justin has on this friend of mine.

However, we all have our heroes in adulthood and I admire him for being quite shameless about his. He gave me the shirt when Justin was booked as a guest on my radio programme and asked if his idol would be able to sign it for him. The shirt goes back quite a few seasons - Justin himself has long left Hull City - and has been worn numerous times. Now it's apparently going in a frame on his wall.

I have only once asked for an autograph in adult life, and that too was an ex-Hull City footballer, my own childhood hero. Garry Parker was seeing out his career at Leicester City when, as a 23 year old footie hack, I waited outside the dressing room on my Press card's say-so and got his signature when he emerged. I kept the signature, and even made a point of keeping the biro - a regular Bic one, in black - in a drawer, allegedly never to be held again. It took a few months before I told myself to grow up and retrieved it for use once more. 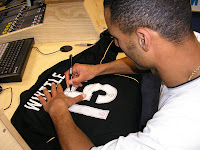 It is good and normal to have heroes... provided a firm grip on reality is kept! I can remember being proud when I got to shake the hands of Killing Joke frontman, Jaz Coleman, at a gig. And I once met Mel Giedroyc and Sue Perkins at a train station. I shambled over and asked for their autograph. Looking back on it now I feel curiously ashamed.