*Even if you decide not to continue reading after a bit, please at least scan the last paragraph and take a moment to reply*

How many centenarians have you ever known? I've been lucky to be close to two. A great-great aunt of mine, Nellie (no, I really did have an auntie Nellie) passed away in 1995, a few weeks after her 100th birthday. She was in possession of every faculty until the last couple of years or so of her life, and had a razor-sharp wit and impeccable memory right to the end.

The second centenarian passed away this week. Charlie Smith wasn't a relative, but he was as good as in many ways, and when I was a child he was "uncle" Charlie. He was my grandad's best friend and my dad's godfather, and devoted his life to the oil industry, cricket, his diaries and Hedon, the fantastic East Yorkshire town where he lived, the same town in which my dad was born and still lives, 68 years later, and where I grew up.

This man's longevity represents just a part of his overall remarkability. A bachelor, he had the Rudds as an adopted family as my dad and his sister grew up in the 1940s and 1950s. His devotion to his sport ahead of his career prompted the most fantastic life-decision I've ever come across - he turned down a lucrative opportunity to work for Shell in Venezuela because they didn't play cricket there. He stuck to working in Hull and Manchester, and even when the latter city took him away during the week, he was back in his beloved Hedon at weekends to play, score or umpire for the cricket club, or commit himself to other duties during the winter off-season.

My grandad died in 1983, when he was 74. Charlie, who was two years older, travelled with my grandma, dad and aunt in the main mourners' car to the funeral. My ten year old self only remembers bits of the day, but I clearly recall my grandma asking for Charlie to travel to the church in the main vehicle, such was his importance to the family and to my grandad. Afterwards, he visited my grandma every week to keep her spirits up and provide company for her. This he did, as promised, with a short walk from his bungalow every week for almost 20 years until a fall robbed him of confidence to get about on his own.

Charlie was the first person I knew who had Teletext. In 1985, I started visiting his home each Tuesday on my way home from school to look at the new Top 40 on Ceefax, announced earlier that day by Gary Davies on Radio 1. I was only 12, so there was no lunchtime social area or common room to place a radio which we could crowd round when the countdown began. This had no meaning to a man who was 77 years old, but he was well-read and astute enough to keep up with a modernising world, and he knew what the pop charts meant to the day's youngsters. I remember him once telling me he had watched Top of the Pops to try to put faces to these strange names he was reading on his television screen as I copied down the chart - it didn't become a habit, but I felt strangely flattered and bemused by this effort. My dad, who was 45, reckoned it was all one big racket and yet his much older godfather was making a conscious decision to learn.

We saw Charlie sporadically as he aged and his physical health subsided over the years, but like auntie Nellie, his mind never wavered or showed signs of declining. When my grandma celebrated her 90th birthday in 2002, this was a big occasion. My brother and his wife travelled up from Devon for it and my eldest cousin came over from his home in California. Charlie, who was 95 by now, also came along. We went to a smart local restaurant where we'd booked a table in a private dining room and the whole family listened intently to Charlie's stories. He informed us he had diaries of many years in Hedon, detailing the changes in the town and the wider world, which both my cousin and I expressed an interest in making public via the internet.

When my grandma died in 2004, Charlie was entirely housebound and in no physical state to attend her funeral, even though it was at Hedon's church just a mile away from his home. Instead, four men of the family - myself, my dad, my uncle and my dad's cousin - decamped to his house after the service to see him and make him feel like he had paid his final respects to his closest compadre in the village, wife of his best friend in formative times. Even at their ages - all these men were in their sixties - they were still calling him "uncle" Charlie.

The last time I saw Charlie was in January last year, when his 100th birthday came round. In need of round the clock care, he had left his bungalow and moved into a nursing home near Harrogate. However, he had stubbornly and brilliantly insisted that the only celebration of his big day would occur in Hedon and that he would be there to partake. So, a lunchtime party at his beloved cricket club was organised, and loads of ex-players, officials and associates, plus family, gathered to welcome the guest of honour.

He arrived, grinning, in a wheelchair, pushed gamely by a carer. He recognised absolutely everyone in turn, and when I spoke to him, he congratulated me on my nuptials and asked me to update him on my radio career, then mentioned he was pleased Hull City were doing well, even though football was not his sport. Apart from telling the same joke three times, which required us all to chuckle politely on the second and third occasions, he showed no signs of a diminishing brain. I'd organised for the Mayor - who happened to double up as the father of an old schoolfriend and who owed me a favour - to turn up and offer Charlie a gift from the town as a whole, and he duly did - as you can see here. 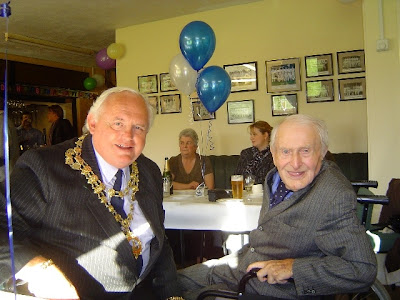 Charlie was 101 last month and died overnight into February 5th. He has, true to form, left a firm instruction that he is buried in Hedon and that the funeral takes place on a Saturday. You don't mourn a 101 year old man who did everything he wanted to do; you walk into the church and to the cemetery feeling privileged to have been a part of an amazing life. That's how I feel. I really hope Hedon sees fit to commemorate this man's life in a permanent manner at some point. His involvement with the cricket club, the legion and his dedication and love for the town as a whole throughout an exceptionally long, worthy life deserves an accolade of some sort.


I ask you, even if you have no reply otherwise to make to this blog entry, just to leave a Rest In Peace message on here to Charlie - a quite astonishing bloke, and one who galvanised many, many lives.
Authored by Matthew Rudd
Email ThisBlogThis!Share to TwitterShare to FacebookShare to Pinterest

Too right. You can't feel too sad for a life so well lived. Charlie... it's a pleasure to say rest in peace. :-)

Carry On Up The Missus said...

Charlie sounds like he was a great human being ... and that should always be commemorated. Rest in peace.