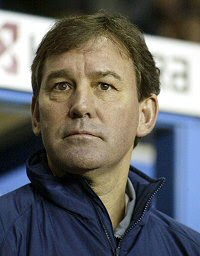 So, with a crushing sense of inevitability, Bryan Robson has been relieved of his duties at Sheffield United. The big mystery for me isn't why it has only happened now, nor why they tried to keep him with some made-up paperclips role called Head of Football, but, very simply, why they hired him in the first place.

Robson fits more than adequately the slightly unscientific theory that the greatest players don't ever make great, or even good, managers. There are exceptions to this, of course - Franz Beckenbauer leaps to mind here. I can't think of many more right now though.

The man who won 90 England caps and played at three World Cups was, as a manager, relegated at Middlesbrough despite buying Juninho, Ravanelli and Emerson; in the same season he reached two domestic Cup finals without winning either (and should have gone out of the semi-finals of one to a club two divisions below, but for a rotten piece of refereeing) and ultimately needed to bring in Terry Venables to stave off more battles with the drop when money alone got his side promoted again. He lasted so long because his chairman, Steve Gibson, is simply the most patient and loyal in the game.

On he went to Bradford City, a side and club beyond anybody's help but he quickly left when he realised the club's ex-Premiership status was going to become an even more distant memory the longer he hung around.

His first club as a player, West Bromwich Albion, then took him on in an effort to stave off a seemingly unbreachable plummet out of the Premiership. A combination of immense luck with other results, inadequacies of three other teams and a little inspiration from showing Geoff Horsfield the gold watch he won for scoring the World Cup's fastest ever goal, earned Albion safety on the final day. For this he deserves credit, but don't believe for a moment that high-quality coaching had anything to do with it.

West Brom still went down the following year (with Robbo seen shouting "you f**king faggot" at Jose Mourinho when Chelsea visited the Hawthorns) and in the Championship they struggled, naturally, and they ousted him. He seemed damaged goods by this point, with surely nobody foolish enough to employ him again.

Then along came Sheffield United. Relegated despite Neil Warnock, not because of, they nonetheless parted company with a superb manager who bled for his club - and hired Robson. Fans elsewhere in Yorkshire, not least in the Hillsborough area, laughed heartily. Warnock, still a supporter of the Blades, must have been raging. Here we are in February, with Robson's underachievement and Sheffield United's myopia in appointing him resulting in a surreal summit in, naturally, Brussels (what was wrong with Killamarsh or Owlerton?) and the final parting of ways.

This isn't meant to be as harsh on Robson as it reads. He was a magnificent player, a courageous, spirited, resourceful midfield general who led by example, tackled with venom and scored wonderful goals. He is Manchester United's greatest captain and, to me, second only to Bobby Moore as England's finest leader on the pitch. The Captain Marvel tag, hung garland-like round his neck by Bobby Robson, was well-deserved and appropriate. We shared his joy at that record-busting goal in 1982 for which the watch was the prize; we agonised with him as his shoulder gave way four years later; we hoped the last-resort faith healer would be able to help him through his injury in 1990. As a player, he was peerless among Englishmen between 1980 and 1990, and his international record backs that up.

But as a manager, he's awful. It's a sad truth. I hope he now decides not to try it again. He doesn't need the money. If he stays out of the dugout now, it might just make us realise once again what an awesome player he was, first and foremost, because he deserves that. And clubs looking for managers can help by not going all dewy-eyed over his playing career if he declares his interest in their vacancy.
Authored by Matthew Rudd
Email ThisBlogThis!Share to TwitterShare to FacebookShare to Pinterest

When are people in football going to work out that "Great Player" by and large means "Shit Manager"?

I have this theory that it is always the average to middling players who sustain a long career at the top who make the best managers. To keep up with the geniuses they have to study tactics more, learn where to be on the pitch to make better use of their limited skills. It is that knowledge that they can transfer into telling a team how to play, and how to negate the attacking potential of their opponents.

ALex Feguson, Jose Mourinho, Sven Goran Eriksson. Bad players or ones whose careers were cut short through injury. As managers they operate at the very top.

I'm good mates with Alvin Martin. A legend in his playing years. When he retired, he had one go at management at Southend. Ballsed that up and never tried again, thus he's still remembered as a great defender and not a shit manager.

Of course it doesn't always follow. Roy Keane is the exception that proves the rule it seems, Jurgen Klinsmann's time as Germany manager was part sentiment and part faith in his abilities, and even Fabio Capello although no superstar was still very handy in his day.

Nonetheless it is the one bankable in football. When a club sentimentally appoints a legendary name as their manager out of nowhere, you know it is all going to end in tears.