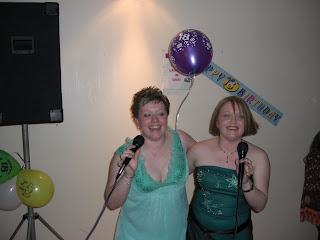 Take a look at these two young ladies doing the karaoke. They're the twin daughters of a friend of mine and the 18th birthday banners and balloons were theirs.

Yes, I attended an 18th birthday party at the weekend.

There's little more stark a reminder of one's own ageing and mortality than to be in a function room at a social club chocka with teenagers, all with their lives ahead of them. The Natural Blonde and I turned up at the social club in west Hull, feeling quite pleased at receiving an invitation, and were greeted by the sight of teenage lads nattering away and teenage girls on the dancefloor.

A few people of the Smash Hits generation were there, mind. They were like us - friends of the girls' relatives or associates through work or the like. They were sitting at tables further back, or standing at the bar, letting the youngsters be, well, young.

There were also younger kids there, including the twins' ten year old brother and his friend. One or two of them carried off Peter Kay's observation to the letter by doing the 'sliding on the dancefloor' lark, which I also did at the Antler Club in freshly ironed trousers when I was ten.

Let me tell you about them (the twins, not the trousers). Tony, their dad, is a chap I've known for about seven years. We live in the same village and initially got chatting in our local one Sunday night because he insists on wearing his Hull City replica shirt as often as possible and therefore an obvious point of recognition was established. When I changed jobs and found myself able to go to more games, I began meeting him and his football mates pre-match in the pub, and occasionally travelling to away games with him.

Tony brought the girls and their little brother up largely alone, with help from his mum. The three generations live together and they're a smashing family. The girls, Coreana (right on the pic above) and Kayleigh, both go to football with him all over the country and attend rugby league matches too. They're great girls, brought up in a lad's world and have responded to that - Tony's battle-hardened football mates, guys who watched games in the bad old days of the 1980s, are their surrogate uncles, mellowing fortysomethings who came to the party and sang at the karaoke. We all castigate the generation after us a little bit, and certainly there are some teenagers around and about who I'd never wish to know, but these two young women are top, a credit to their dad. And their little brother, Connor, is a good-looking and funny lad who has much ahead of him. 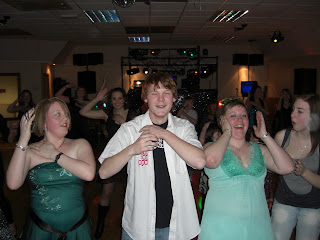 The girls' cousin, Greg, is pictured here with them. It was his birthday celebration too, although his 18th had been on Christmas Day so they decided to have a big do together once the girls' day had come. He's a thoughtful but droll chap, a talented guitarist and, again, someone who his family can look at and think "we did a good a job there".

The photo is of the three of them doing the Macarena - immediately afterwards they started on the Cha Cha Slide. I now realise exactly how impressed/confused my own parents must have been when the 12 year old me was doing Superman or Prince Charming in the 1980s and they were sitting at a table, watching. I can honestly say I don't have the foggiest where the Cha Cha Slide came from, when it was, or who does it. The first time I heard it was at a wedding do a few years back, and it was a case of "what in the name of bloody hell is this?" - and not in a flattering way either. But every teenager in the room went to the dancefloor to do it. 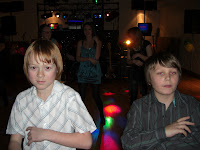 Even more impressively, here's a photo of Connor (right of the picture) and his cousin Simon doing the actions for Saturday Night - yes, the Whigfield monstrosity. Their actions are impressive because the song is older than they are, but they know all of the choreography. I don't. I had no real urge to learn it when I was 22, and I never have. Funny that...

I have no recollection of my own 18th birthday. As I was born in the last week of May, my birthdays often fell during half term (luckily so at primary school, where getting the bumps was traditional) and when birthdays during the crucial period of education arrived, I was swotting. Indeed, I know I did take my GCSE History exam on my 16th birthday (passed after a resit, in case you needed to know) and was almost certainly cramming some quotes from Anthony & Cleopatra or fretting over my French subjunctive (which I still don't get) when my 18th arrived. I may have gone to the Shakespeare Inn in Hedon for a drink, but I may not too. I really cannot remember.

I do know that 21st birthdays were regarded still as the more significant even as recently as the early 1990s, even though there's very little you can do at 21 that you can't at 18. My 21st was spent at the Beaumont Arms in Huddersfield with work colleagues. I drank lots of lager and walked home. Hardly unusual.

The girls each got an 18th birthday mug from the NB and I, and we bought Greg an 18th birthday tankard (okay, a pint glass). Given the sporting surroundings that the girls have been brought up in, all three of them should have had pint glasses, but the shop only had one left and therefore the lad kind of got it by default.

I saw Tony in a West Bromwich pub the next day as we all convened for Hull City's match there and he looked like he had been drinking all night and just decided to keep it up. Coreana, despite being as rat-arsed as any 18 year old on their birthday is expected and allowed to be, was there. Kayleigh didn't make it though - the perils and evils of drink robbing her of what turned out to be a highly significant and utterly brilliant victory for Hull City. And tonight, I'll join Tony, his mum, Greg and one of the girls (the other stays home to babysit Connor - they take it in turns) for our local's pub quiz. And we'll drink a little bit more.

I end this with Tony, in yellow shirt, posing as the proud dad. 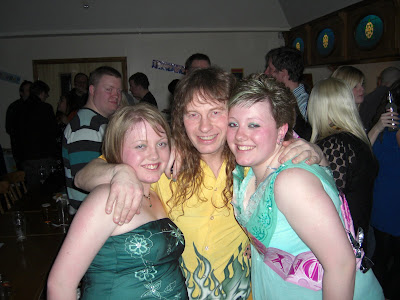 Aw, how very lovely. Didn't Tony used to be in The Darkness?