I enjoy watching the Crufts highlights every year, despite Ben Fogle's existence and some of the technical incompetence ("this happened last year!" whined Clare Balding, thinking she was off air, when a mic in the arena initially failed to work) of the BBC.

When I let slip a year or two back to my football compadres that I'd been to Crufts twice, I got absolutely ripped to shreds. But I have. Four pedigree Basset hounds, bred by a top show hound breeder, equals involvement in dog shows. Bentley has been to Crufts twice, Boris once. Neither of them got anywhere - Basset hounds never do, sadly - and we decided that ferrying them round the country was too much for them, so we stopped. I haven't been for two years, but the Natural Blonde has been to all of the last five on Terriers & Hounds day at the NEC.

She didn't go this year. I couldn't because my work schedule means I only sleep on Sundays at the weekend and I would have been a zombie making that journey. So we contented ourselves with the BBC coverage, saved largely by the offscreen commentators and Matt Baker. If Richard Hammond and Philippa Forrester ever fancy a comeback...

Some people are snobbishly against dog shows, claiming it's a scene just for the rich, the pompous and for people who only want dogs for their own personal gain. Well, let me nip some things in their respective buds; you don't get rich with dogs, irrespective of their quality. The qualification shows round the country earn you peppercorn winnings if you happen to be lucky, and the veteran shower and his superb seven year old Giant Schnauzer who got best in show this year picked up the grand sum of £100. 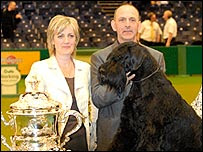 The majority of owners and breeders adore their animals, all of them are still family pets and given that success is as much about quality handling as a quality dog, it's a testament to the love and trust which a dog gives back to its owner, which is just the most rewarding thing ever.

Breeders are professional and by definition in it for the money, but they are predominantly scrupulous about it. My Bassets came from a kennel in Lincolnshire, which doubled up as boarding kennels. I'm certain there are rogue breeders out there, of course they are, but the breeders who make a living from raising and selling on new litters do so responsibly and honestly.

Our Bassets were worth a lot of money when we bought them. They're worth zero in cash now, given that they're ageing, neutered and without a showing reputation. But owning a show dog is an expensive business which actual success in the ring does not repay. Once you've acquired the dog, there are the kennel fees, the veterinary fees, the food fees, the training fees, the accessory fees, the travelling... all for winning £100 at the World's Biggest Dog Show. Oh, and whatever sort of dog you own, don't buy stuff for him at Crufts. The goods on sale during the event are expensive beyond comprehension. It's as if Welcome Break or Moto had won the franchise.

The fellow who won with the Giant Schnauzer (which was our favourite in the final too) will get a few quid in time for the prestige that goes with the win, plus the inevitable Pedigree Chum advert. But then he'll probably retire his dog (who is seven, which is beyond peak for most show dogs) and start the whole process again.

I do have some canine aversions. Like most things, dog ownership is about taste, so the Toy dog section (except the Pug) means nothing to me at all. There was a Chihuahua in the final, and they just don't seem like dogs to me. Four of my cats are bigger than a Chihuahua. I've met a couple and know first hand what a vicious little sod they can be. I'm also not keen on the bred-to-menace types, like the Rottweiler.

I'm also uncomfortable watching the dancing dogs, which have become the traditional Crufts finale warm-up show. The same lady is on every year doing routines with her Border Collies which show amazing skill, obedience and patience, and a stunning dependence on his mistress by the dog, but I can't help but think that it is entirely unnecessary. Obedience is good, but something tells me this goes too far.

A better indication of the love and dedication that dogs are capable of comes from the Friends For Life section, which highlights dogs who are invaluable companions to a person who is physically, mentally or emotionally disadvantaged. It was won this year by a Hungarian Vizsla and her mistress, an eleven year old girl with cerebral palsy. Last year's winner was a lad in a wheelchair who burst into uncontrollable sobs when his name was announced.

To me, dogs need to be a good-to-big size, cute, awkward, protective, hard work, rewarding, loyal, cheeky and a little bit insane. I've got all of those things in my Bassets. If I were to choose a new breed of dog to own, I'd go for a St Bernard or a Newfoundland, a Whippet or a Bulldog, an Irish Setter or even a Pug. For all that though, my first recommendation to a potential dog owner is to find a loving mongrel at your local dogs' home.

Funnily enough - I always enjoyed 'One Man And His Dog' There was something so green, country and carefree about the whole show I found it strangely soothing.

My dog justifies the existence of small dogs single-handedly. She's all the dog you'll ever need just with a much smaller pawprint. I know everyone thinks their own animal is tip-top, but a great many dognostics admit to making an exception for my pet. Even cat lovers admit she's great.