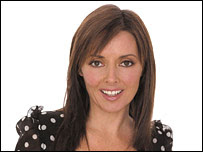 I like Carol Vorderman very much, but this story about her ill-treatment over leaving Countdown is a bit overblown, to say the least.

The brain-dead Daily Mirror (we get it in the office, I didn't buy it) had Rick Wakeman, Esther Rantzen and the unspeakable Sian "Churchill ads" Lloyd, a woman beyond hateful, all defending Carol as if she were some great heroine of truth and goodness whose departure from a light-hearted parlour game somehow represents idealogical heresy.

Those who say she should have learned to struggle by on a hundred grand a year are missing the point. Anyway, she'll have overheads to reflect a much bigger salary so the salary cut issue is actually relevant, even if the figures involved represent a mere dream to most of us.

Ultimately, she's lost her job, and that's sad. But it happens to far more people on lower salaries, with lower profiles and with no column inches full of sub-celeb "mates" saying how appalling it all is really.

She can return to First Plus if things get desperate (to advertise them, not get a loan, I should add). But it's not as if she won't be off our screens for long; she's a high-ranking television presenter who happens to tick most boxes - looks, intellect, experience and a mucky laugh. We need not weep for her.

Footnote: This think-piece on Ms Vorderperson's career contains two celebrity spelling mistakes, paid for by our licence fees. Can you spot them?
Authored by Matthew Rudd
Email ThisBlogThis!Share to TwitterShare to FacebookShare to Pinterest

I quite like Carol but, yeah, she's hardly a pauper. And it's not like she did much on Countdown aside from deal a few oversized cards and do a couple of A level maths questions. I could do that. Apart from the maths questions. Or I could just wear a silly tie and compere the show. A fiver an hour. A bargain really.