I hate the Premier League already

This is advanced hatred, by the way - the powers-that-be of English football's elite, into which Hull City were promoted on my 35th birthday in May (have I mentioned that anywhere before...?) may yet prove me wrong, but the likelihood is that they are all set to annoy quite a few fans within our city shortly.

Hull FC, one of our two rugby league sides, have reached the Challenge Cup final. It's at Wembley on Saturday August 30th. Even southerners who are only aware of rugby league because of its actual non-existence on their patch are aware of this showpiece event, if only because it's had national BBC coverage courtesy of Grandstand (RIP), Eddie Waring (RIP), Ray French (happy retirement) and now Dave Woods, for numerous decades.

The game is at Wembley - two visits for our city in the space of three months - and kicks off at 3pm. 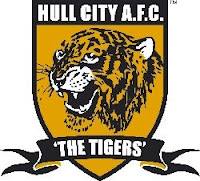 At precisely the same time, Hull City play Wigan Athletic at home in the Premier League.

Many Hull FC fans are also fans of the Tigers and vice versa.

But the consensus is that the Premier League will not agree to move the kick off time of the Tigers' match to, say, midday so that City fans can watch the match at the KC, then beetle off to the pub or back home to be in time for the rugby on telly. Indeed, the Hull City chairman Paul Duffen has already said that essentially it's a fruitless exercise asking. And yet the identity of our opponents and their town's own rugby league heritage suggests that getting consent from them wouldn't pose a problem.

There can be a sticky relationship between Hull FC and Hull City, with almost as much rivalry between the two sports in Hull existing as there is within the oval ball game itself between Hull FC and our other rugby league side, Hull Kingston Rovers. Whenever there is violence at Hull FC games, and it does happen despite what the most extreme of rosily-tinted rugger apologists will tell you, it's blamed on "interloping" or "incognito" Hull City fans. Which is bollocks, frankly.

But the fact remains that a good chunk of people in a big sporting city which has had some unprecedented success in both sports will miss out on one of the two occasions. Hull City versus Wigan Athletic isn't a massive occasion in the grand scheme of the season ahead, but it is still only our second ever home game in the Premier League and those who also bleed black and white will want to watch it, especially if we happen to have made a half-decent start in our previous two matches against Fulham at home and Blackburn away.

My guess is that even many rugby-hating City fans will also fancy watching the Challenge Cup final too, if only out of idle curiosity or a rather cynical desire to watch men in black and white cry in defeat.

If Hull City don't make an application, then the onus isn't on the Premier League to switch the kick off time. But even if they do, I fear it will fall on very deaf ears. And sport in Hull is, consequentially, the loser.
Authored by Matthew Rudd
Email ThisBlogThis!Share to TwitterShare to FacebookShare to Pinterest