Fab company and a fab night. I found myself sitting next to Sally in the restaurant and basically spent the next hour or so being utterly charmed by her. When I replied to her question regarding where I was from, she replied: "Ah yes, the A63 into Hull!" Traffic news wherever she goes... still, at least it meant I could explain to her who Clive Sullivan was.

Kipped on the Dark Lord's bachelor sofa and was shouted awake by the man himself at 7.30 on Saturday morning, ready to have my hangover cured by a quick Resolve, a quicker wash and a marvellously slow fry-up the size of Bucharest, prior to hitting the train at 9.30 to get back home for the football.

Oh, and we won. Just in case you didn't know.

I will close this blog entry with a photograph of me and my new showbiz friend, Sally Boazman. Self-awareness and shamelessness don't become me. 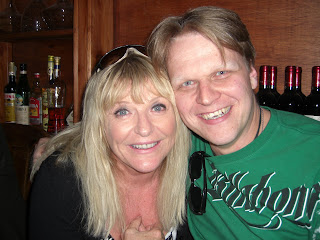 I always thought her surname was Traffic. Which I'd considered fortunate given her job, now you tell me it's stage name? Pah!

Next time you see Greg James, tell him to stop licking Moyles's arse on the handover.

Good win for the Tigers on Saturday. I listened in the car to KCFM on the way home from work, mainly becuase my own team have decided to contract their commentary to a DAB only station (don't even get me started on that!).

It's the start that was needed. May your good fortune continue throughout the season.

The world of radio presenters is a small one with nationally recognised radio personnel such as Alex Lester and Sally Traffic being great friends with top local radio presenters such as Hirsty and yourself. It looks like a great industry to be in, both from job satisfaction and social points of view (not that I'm envious or anything!)