A new footballing experience for me yesterday - I visited a Scottish ground for the first time ever, tipping up in Edinburgh for Hull City's pre-season friendly at Heart of Midlothian. 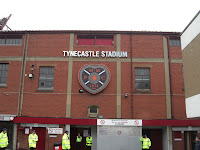 It's actually only my second visit to Scotland as a whole in my entire life - the first was back in 1990 when I agreed to travel with my parents to the Glasgow Flower Festival on the proviso that I could beetle off to the Glasgow Radio Festival when we got there. Inevitably, my parents decided upon arrival that the radio festival was too far away from the parking facility at the flower festival (for what it's worth, I can't remember any of the details) and so instead I spent four hours wandering around a glorified garden centre looking as bored and as irritated as any archetypal lad pushing 17 could look at a distinctly teenage-unfriendly location.

So this time I was hoping my second visit north of the border (do the Welsh use that expression too, even though they have to go east of another border first in order to head for Scotland?) would be more productive and enjoyable.

The Sunday morning drive up from Stockport (where I'd done my gig the night before) was pleasant and quiet, which I needed after just five hours' kip. I am always enchanted by the beauty of the Lake District when I see it, and after crossing the border (and chuckling as I recalled our beloved Dean Windass believing he needed a passport when he first joined Aberdeen) I drove through countless easy-on-the-eye Scottish villages after leaving the A74 near Lockerbie and heading eastwards.

I managed to park in an extended car park adjacent to a local Somerfield and did so for free. In England, most private car parks on matchdays fleece you for up to a tenner. These, of course, are not car parks at all, but the local tyre firm with a spot of extended land making a quick buck by planting a crudely drawn "CAR'S AND MINIBUS'S - £7" sign at their entrance, and then packing you in so tightly that everyone's safe exit before midnight is only guaranteed once the owner of the very last car to squeeze in actually returns to their vehicle.

I walked along Gorgie Road, a brilliant football fan's road (plenty of seedy pubs with doormen and takeaways of considerable greasiness, plus the obligatory bloke selling knock-off scarves for HEART OFF MIDDLOWTHIAN while watching out for trading standards) and got the odd "who are ya!" from the more cerebrally unblessed local who'd cleverly ascertained that my black and amber striped shirt, complete with giveaway badge bearing the words 'HULL' and 'CITY' meant that I was possibly not in attendance to support the same team as him. The fact that he still had to ask who I was is something I can't explain...

Ended up in one of these seedy locals, the name of which escapes me. It wasn't the Tynecastle Arms, which my two comrades who'd travelled by rail had managed to infiltrate, as that pub wouldn't allow any club colours inside. My pals were in civvies and presumably at least one of them had affected enough of a Morningside accent, drowning out the famously lipless Hull vowels, to the chaps on the door in order to worm their way in. The pub I drank in could, from the inside, have been a pub anywhere in the UK, although the £2.70 it charged for Guinness suggested that prices from south of the border (and certainly south of Sheffield) hadn't quite made it to their parts.

Tynecastle itself is part-smart, part-neglected. They've done three of their stands excellently, with the seating spacious and the view unobstructed by those ridiculous pillars that some clubs insist their roofs need right behind the goal. One side - where the club officials and press have their quarters - is less developed. The really neglected bit is the immediate surroundings of the viewing area though - the concourses are dirty, the paintwork dead and I'm in no doubt that the rust on the corrugated steps leading from the turnstiles to those concourses is decades old. I can't imagine what a Hearts v Hibernian match was like here in the 1970s - I thought the south stand at Boothferry Park (Hull City's lamented old stadium) in 1987 was scary enough. 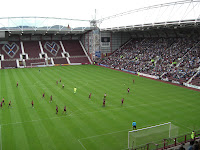 I ate quite easily the worst-tasting (and worst-prepared) hot dog in the history of dodgy football catering before the game. Imagine taking a sausage in the factory from the bits normally deemed not good enough for sausages, undercooking it in tepid water, then placing it in a stale, half broken breadcake which isn't big enough to accommodate the sausage while simultaneously grunting your desire to be somewhere else, wiping your nose and demanding three quid.

I had four bites, just as many grimaces, and then located a bin.

The game itself was not good, but pre-season friendlies are rarely designed to entertain. They're there to get the players fit, introduce the new recruits to their team-mates and give the manager as good an idea as possible about the formation and personnel required for when the real business starts.

In front of 300 or so hardy Hull souls (plus the Hearts contingent which wasn't plentiful enough to warrant opening all three of their viewing areas), we lost 1-0.

As I walked back along Gorgie Road to the car, I had to pass lots of bus stops full of claret and white shirts and scarves. One or two teenage types started singing "1-0, 1-0, 1-0" at me, presumably in case they needed me to confirm the score back to them as they'd forgotten. Amazingly, a chap in an orange cagoul across the road started chanting "Premier League, you're having a laugh" at me, while walking his small daughter (assuming a woman has ever allowed him into a position to father a daughter, which I'd doubt, so maybe it was his niece) home from the game. Quality display of responsible, mature fatherhood, or unclehood, there. I could have responded by saying something like "at least our chairman doesn't sack the manager every five games before finally appointing one of his mates with less-than-impeccable qualifications without giving him total control of the team or who to sign, resulting in your status as the Old Firm's most likely conquerors being severely tarnished to the point of finishing in the bottom half of the table and as the laughing stock of the Scottish game" but I couldn't think of a popular melody in which it would easily scan.

These people are the exceptions, of course, and I got some polite "good luck" comments from many more at these bus stops, although most totally ignored me, and quite rightly. We had our usual unlovelies in the Hull City end too, who embarrass me.

A four and a half hour drive back to Hull then followed, which was almost entirely motorway free as the sat nav took me to Dalkeith and Jedburgh prior to reaching the border (the border point on the A68 is absolutely brilliant, by the way - stones, flags, a beacon, tourist lecterns and a great reminder to 'drive on the left', as if the Scots have actually been right-hand drivers all this time and just forgot) before a long traverse through the Northumberland hills and Durham countryside, finally hitting the A1 at Scotch Corner, 75 minutes from home. The scenery is absolutely mesmeric, utterly gorgeous. The length of time taken to drive through it when heading a long way south is not, especially as the endlessly rural route renders service stations an unnecessary eyesore, even when there are long distance drivers with empty bellies and full bladders coming through. Like me.

Got home just after 9pm (the game ended at 4pm, then the walk to the car was half an hour), had a pie and chips and fell asleep on the settee, totally spent. And we do this all for fun.

The Premier League starts a week on Saturday.
Authored by Matthew Rudd
Email ThisBlogThis!Share to TwitterShare to FacebookShare to Pinterest