Not a bird, nor a plane 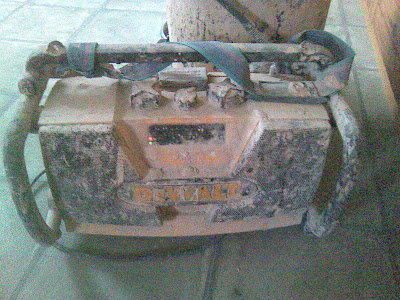 Any idea what this is?
Authored by Matthew Rudd
Email ThisBlogThis!Share to TwitterShare to FacebookShare to Pinterest

A wirelees.
See the Profanisaurous entry for 'face like a plasterer's radio'. Ho ho!

A wireless even. Bah!

I was going to say the plasterers' radio thing. Bah.

Correct, of course. It's a great photo isn't it? I looked at it and briefly wondered what the hell it was, only then to realise that the voice of Sara Cox was coming out of it, clearly and purely (well, as purely as Sara Cox's voice can come out of anything). But given that only the sound gave it away to me, I wondered who would know what it was purely from looking at it...

I'm an expert on DeWalt radios. Have I won a prize? A t-shirt'll do, you must have some from a radio promo thingy.

Would you like a Spark FM drinking straw? Only been sucked four times. I can give it a rinse.