Mad as a bicycle

I'm driving home on a major bypass, 6.15am, and I see a bloke cycling on the opposite carriageway. It's pitch dark, and he has no lights, no flourescent clothing and no helmet. The road has no cycle path, no lighting, a 60mph speed limit and a number of vehicles intent on reaching that very limit.

Oh, and we have very high winds, beyond 80mph.

The bloke must be genuinely suicidal. There can be no other rational explanation. And yet if someone driving perfectly legally were to knock him over, you can guess which person wouldn't get the blame.

This cyclist can kill himself if he so wishes, but he has no right to put car drivers at such an awful risk - not of death or injury, but of lifelong guilt over something not their fault.

I despair.
Authored by Matthew Rudd
Email ThisBlogThis!Share to TwitterShare to FacebookShare to Pinterest
1 exclamations of response 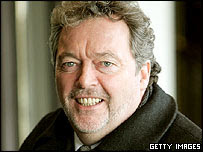 I wasn't a massive fan, but it's genuinely sad when a celebrity who formed much of one's adolescence, for reasons right or wrong, passes away at such a young age.

Out On Blue Six knows its stuff, so the deserved tribute is right there - click it when you can. Jack Kibble-White of TV Cream has also poignantly catalogued his thoughts on Beadle's sad demise.

For my part, I just remember the stick Beadle got from The Mary Whitehouse Experience ("in the old days, the act of forcing innocent people into a life of degradation and danger was known as press-ganging; nowadays it's known as Beadle's About"); Spitting Image (the "we all hate Jeremy Beadle" song) and Loose Talk (numerous witless insults from Kevin Day) and thinking even then that he didn't deserve it. It was the typical backlash against the mainstream, which is what Punt and Dennis, Hislop and Newman, Thomas and Day were about, but it seemed to be artless sticks and stones stuff for nobody's good. It's amazing how we were told he was universally despised, and yet his viewing figures were stratospheric. Someone was lying to us... and it wasn't Beadle.

His programmes weren't to my particular taste, but the prankster in him always seemed good-natured to me. I liked the man more than his shows, and I suspect that is quite hard for a personality to achieve.
Authored by Matthew Rudd
Email ThisBlogThis!Share to TwitterShare to FacebookShare to Pinterest
3 exclamations of response

Jonathan Woodgate's move to Tottenham Hotspur is by far the most astute bit of transfer business in the window so far.

He and Ledley King together? Assuming they can stay fit, that's a cracking partnership. Now all they need is a goalkeeper who can catch the ball.
Authored by Matthew Rudd
Email ThisBlogThis!Share to TwitterShare to FacebookShare to Pinterest
1 exclamations of response

"For Hull and East Yorkshire... and the sub-continent!"

I'm on a radio station in Hull, happily and merrily playing Lipps Inc and chatting about snow, and I get an email from an old Hullensian ex-pat listening in Goa.

Sorry, I know it's easy to do and all that, and it's great, but it still completely freaks me out.
Authored by Matthew Rudd
Email ThisBlogThis!Share to TwitterShare to FacebookShare to Pinterest
1 exclamations of response

"It'll be an interesting job and really rewarding..."

My careers officer and my head of sixth form at South Holderness School each told me I'd never achieve either of my ambitions.

These ambitions were to be a radio presenter and to work as a journalist.

Specifically, I recall the toothless careers teacher saying journalism was "too competitive", while my head of sixth form - a ghastly man whom my parents loathed - literally laughed in my face when I mentioned I fancied trying for a radio career.

It gladdens my heart a little, therefore, to see that nowadays kids are being encouraged to follow their dreams and at least research and understand them a bit more. This is backed up by a friend of mine's 14 year old nephew being granted permission by his school - South Holderness again, though it's now obviously a Technology College, not just a meagre school - to apply to the radio station where I work for his summer placement.

I managed a summer placement at Viking Radio in 1990, when I was 17. But I organised it myself, as the sixth form thought it was an entirely futile and silly idea.

It was okay. I've always confused the folk I trained and worked with, as I wanted to be a journalist in print but also to work on the radio. Therefore I went to Viking and was placed in the newsroom, but kept slipping through the studio doors to badger the jocks too. My buttocks still clench at the thought of how awful I must have been.

On the radio, I wanted solely to present, play music, chatter to people. My newsroom ambitions were confined to the print side. And though I ended up doing both, I still see absolutely no attraction in working in radio news, while not for a moment demeaning or undervaluing the achievements and talents of the many excellent radio journalists we have.

My first ever period of work experience lasted just an afternoon, as it was all the school could agree on with the Hull Daily Mail back in 1987. If you know Hull a little, you'll recall that the newspaper offices are now a large black hexagonal-effect building on the huge junction of Ferensway and Beverley Road. It opened in 1989 - I know this as I was a labourer on the site during the summer break after taking my GCSEs, and it would be the nearest I ever came to a paid job at my local newspaper.

Previously, it had been in an old city terrace office on Jameson Street, a narrow HQ with lots of stairs and the musty, lingering smell of pipe tobacco. It seemed shot to bits and ready for its relocation when I climbed the stairs as that 14 year old boy during my half-term break, but I bet it was a great building in which to bash typewriters in the 1970s, when Hull was reporting on the Humber Bridge's completion being five years overdue and not realising that a series of house fires were not accidental, but the work of Bruce George Peter Lee.

My afternoon appointment was with the assistant editor, a lady whose name totally escapes me. All she and the place had time for with work placement schoolkids was an hour or so, consisting of guided tour and a chance for the kid to ask questions. And that's what I got. I remember meeting David Bond on my little tour, the Hull City writer whose old job is still the only one I'd ever go back to newspaper journalism for (not that I think for a moment they'd have me). He was polite to me, in a sort of "if I'm nice to this snotty kid he'll bugger off more quickly" manner, though he did have a bad cold, as I recall.

Then I interviewed the assistant editor about being a journalist. I remember very little about this, just bits of information about being "on call" and learning shorthand and the like. Then off I went, notebook in pocket, my ambitions not deterred.

I went back to the Mail after it had relocated, and had a full week in the newsroom. This time I was going out with reporters and writing stuff, even though none of it was published. Basically, the deputy news editor would give me a couple of press releases a day and I'd turn them into news stories, and he'd critique them afterwards. I went to court, to a council press conference and, most eye-openingly of all, to a death knock. Death knocks - visiting the relatives of someone just newsworthily deceased - are something you simply cannot be trained for, especially when in a profession regarded as heartless and lacking in depth.

My final time at the Mail was in 1992 when I was actually on an NCTJ training course. I worked hard to get it, as while achieving a week of placement as a wannabe schoolboy was straightforward, they said no when they got a polite letter from me as an undergraduate of their trade. I was so incandescent with rage I wrote back - firmly but politely - to ask them to reconsider. I think the news editor offered me a week's placement either as a) a sign of respect for my sheer nerve; or b) a way of shutting me up. Possibly both. Even now, I find it amazing that they didn't peck the order a touch to allow people actually training for the very career in question to shuffle towards the front. That said, I'm also amazed I had the gall to write back in protest and get away with it.

I got masses published, and enjoyed the week. One or two semi-powerful people (well, they are at the time; looking back it was actually a sub-editor and one of the general news reporters who now works for the Daily Express) told me to write back and ask for an apprenticeship after I'd completed my pre-entry training. I can't remember the exact details, but you got your pre-entry certificate, served as a trainee on a paper and then took a final exam through your paper a year or so later.

So, as I embarked on my exams for pre-entry (law, public affairs, journalism standards and shorthand), I wrote to the editor asking for a job. He wrote back and said no.

And that was that. I had to look beyond Hull for work.

Work experience is a weird beast. The kids I grew up with were encouraged to go to places which held genuine interest to them (even if cretinous heads of sixth form laughed in your face when you said where that was) but this posed a problem if you didn't yet know what you wanted to do. One of my closest schoolfriends, and also one of the cleverest, was a girl called Alison; teachers and pupils alike knew she'd be a roaring success in employment but she had no actual career ambitions or goals whatsoever at school and therefore organising a work placement for her was rather tough.

So these offices, factories and other places of employment either got the enthusiastic, know-all wannabe who didn't leave you alone, or the surly, unmotivated introvert who showed no interest at all. I was certainly the former, and I'm actually glad I was, even if I was insufferable. At least I wanted to be there; and that seems to be the way placements go today. Frankly, if a kid doesn't yet have career ambitions at 14, far better to keep them away from the factory floor than leave them at the mercy of those on it.

My career in journalism ended in 1998 when I got my first full-time presenting gig. After all that effort, it turned out that I wasn't cut out for it anyway!
Authored by Matthew Rudd
Email ThisBlogThis!Share to TwitterShare to FacebookShare to Pinterest
0 exclamations of response

A combination of the Christmas 1982 Top Of The Pops being re-aired on BBC Four, and Mondo's letter from Dave Vanian inspires me to tell you this little gem of a tale...

A guy who frequents my 80s night and is heavily into his 80s indie, new wave and goth stuff, went to a Damned concert in Manchester recently. During the gig, the crowd decided, for reasons not explained, to start singing "Sensible's a w*nker, Sensible's a w*nker" at the erstwhile scarlet-bereted axeman.

Burns, to use his real surname, responded by walking over to a keyboard at one side of the stage, adjusting the microphone so it reached his mouth and shouting "Shut the f*ck up, or it's Happy Talk."