Okay, at a particularly life-deficient time for me, and in the absence of any sort of interesting outlook on world events, it's another round of ... iPod roulette!

Exposing my musical soul for derision and ridicule today is...

1: Telegram Sam - T Rex
"I ain't no square with my corkscrew hair". More rock stars should have alluded to their physical features in song. Shaun Ryder should have mentioned having a massive nose on some coked-up B-side. Carly Simon's teeth should have made the lyrics of You're So Vain as a possible reason why Warren gave her the elbow. I'm a big Bolan fan, to the extent that he's probably the only rock star of whom I speculate as to how they would look and what they would be doing today if they'd not popped it so young.

2: Come Back My Love - Darts
I challenge anybody in the whole world to listen to this and not feel like the happiest person alive thereafter.

3: Natural Blues - Moby
"Oh lordy, trouble so hard..." Not really typical of my taste, but there was something about that commercial streak of Moby's with the Play album at the end of the 90s which stuck with me, despite Richard Allinson using Porcelain all the time as a talkover bed. Like the vocal on Praise You, I always assumed the sample on Natural Blues was a bloke singing, but it isn't. Moby was ubiquitous at this time on the I Love... and Top Ten shows, claiming to be influenced by everyone from Frankie Goes To Hollywood to Wayne Hemingway.

4: Girls - Moments and Whatnauts
I adore this record. The line about the best girl not just being "the one who does the best cooking" cracks me up, but it's still as sweet a single from the 70s as you'll find.

5: Cardiac Arrest - Madness
Probably their least remembered single of that marvellous early 80s period and yet one that conjures up some stark imagery in the head, as a man struggling with the crossword in a bowler hat on a sweaty morning bus keels over, his last thought being how his family will cope without him. It should feel like a much sadder song, but it's Madness. It's ace.
Authored by Matthew Rudd
Email ThisBlogThis!Share to TwitterShare to FacebookShare to Pinterest
1 exclamations of response

Wear your Whittle with pride

Essential T-shirt of the year to be found here - unless you're a Newcastle United fan. Then you'll hate it.
Authored by Matthew Rudd
Email ThisBlogThis!Share to TwitterShare to FacebookShare to Pinterest
0 exclamations of response

On the telly in the studio overnight was BBC2 (sorry, BBC TWO), which had been there by default all evening by the time I got in to do the show. Obviously a studio telly never has sound switched on, but even with this handicap I found the programming oddly compelling.

Have you ever watched overnight BBC TWO? It's the educational channel now. All that GCSE Bitesize stuff has dominated their off-peak, nocturnal schedules, plus the occasional movie version of a book on school or college syllabi. You'd hope the kids it was hoping to enlighten had Sky+, as they'd otherwise be fast asleep when it was all on. Anyway, two such curriculum-friendly movies were on in the small hours today.

I occasionally looked up from my work overnight at the screen. Even someone as well-read as me (ie, someone who is not well-read) can't guess what the production is just from costume, set and mouth movement so I had a quick scan at the BBC website. First up was Death of a Salesman, which I've never read. Warren Mitchell was playing the main character while wearing a preposterous wig, the sort that Roger Mellie would have ripped off on live television for a cheap gag. I read The Crucible for A-level (didn't really get it) and I know Arthur Miller lived a long life and part of it was spent in bed with Marilyn Monroe. I know culture, me.

Then there was a play which I again clearly couldn't identify due to a mute screen, and this time it seemed to be populated entirely by teenagers. A quick glance at the schedules informed me it was a National Youth Theatre version of The Merchant of Venice.

Now, this was the first Shakespeare play I ever read. I think I've only read four in total in any event, but I remember being asked to read the part of Antonio in my GCSE English class in 1988, hence my remembering the words quoted in the title bar here. Marcus Norrison was Bassanio, Rachel Andrews was Portia and Joanne Spratling was Nerissa. 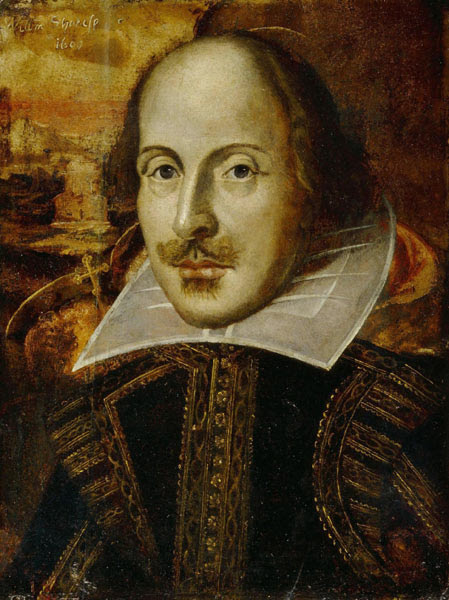 Apart from the stuff that's now in modern usage from Shylock (Philip Mackinder) I can't remember a damned thing about the plot. This is because, like 95% of the 16-18 year olds who have ever had a Shakespeare play thrust into their hands, it was just too much for me to take in. A-level students who aren't at the very, very high end of the intellectual level struggle with Shakespeare, so giving it to 15 year olds whose development was less promising seemed entirely pointless then, and remains so now.

I read As You Like It and Antony and Cleopatra at A-level exam level and studied A Winter's Tale for the coursework section. My abiding memory of this was going to see a stage version of the latter at Hull New Theatre and being delighted to see that one of the main characters (God knows which) was being played by Bullet Baxter off Grange Hill (or the builder who smacks Manuel in Fawlty Towers, if you prefer sitcom to titular kids' drama). Michael Cronin, to give the guy his name. That dominated the discussion at the interval, in the minibus home and in the lesson the next day. Miss Hughes must have despaired.

I loved the gag in that Millennium edition of Blackadder in which the eponymous cynic is seen giving Shakespeare an almighty punch in the face, claiming it's on behalf of every teenage student for all of the centuries to come. Punt and Dennis claimed that Shakespeare is propped up by the taxpayer purely because of the belief that "if it's old, it has to be good". Frank Skinner put Shakespeare in Room 101. And Desert Island Discs give you the complete works as a matter of course. If I was on said island, I'd struggle to read much of that, irrespective of how bored I was. After all, what use is a Shakespeare play without the York Notes?
Authored by Matthew Rudd
Email ThisBlogThis!Share to TwitterShare to FacebookShare to Pinterest
0 exclamations of response

"Running from a bad home with some cat inside..."
Authored by Matthew Rudd
Email ThisBlogThis!Share to TwitterShare to FacebookShare to Pinterest
0 exclamations of response

I wish they'd hurry up and have this election in the USA. The blanket coverage of just one party's expensive, procrastinated effort to pick a single candidate is really starting to do my head in.

I bet when Gordon calls an election here next year (and then hides for a month after doing so, on the perfectly reasonable grounds that his best chance of winning is by sitting at home with gaffer over his mouth until the polling booths shut) that the American media barely notices.

My first memory of American elections is when Reagan's win in 1980 was announced by John Craven on Newsround. My mum commented to me that the new president used to be an actor, making me think how cool it would be for Dennis Waterman to get the gig over here.
Authored by Matthew Rudd
Email ThisBlogThis!Share to TwitterShare to FacebookShare to Pinterest
0 exclamations of response

Yes, I know I've been fiddling around with the colour scheme lately. But I'm quite happy now with this white-black-amber combo so I'll stop irritating you with it.
Authored by Matthew Rudd
Email ThisBlogThis!Share to TwitterShare to FacebookShare to Pinterest
2 exclamations of response

A bit of shopping today ... there was a book I wanted for my holidays and I was also after a pair of sunglasses after my last ones went AWOL at Wembley.

I went to Boots with a half-price voucher for shades, which was handy. All the staff in the optical department wear spectacles, probably whether they need them or not. Here I saw examples of both the best type and worst type of customer services.

The best was when an old and severely physically disabled lady, with a profound speaking problem, was trying to get a new pair of specs. The sales assistant who dealt with her was the epitome of patience and thoroughness, listening carefully as she dealt with the lady's needs, sorted out her eye test and came back with numerous pairs of glasses, helping them over the lady's eyes, checking her hair wasn't caught and generally putting on a display of concern and assistance which impressed me greatly. It was outstanding. I hope her store manager and Boots as a whole is proud of her.

The worst was when another sales assistant started to deal with a customer's request to collect her new contact lenses. Just then, the phone rang - and she answered it. Whether it's internal or a customer, the phone comes a poor second to the person standing in front of you, needing your service and help, especially when you've already begun to deal with their custom. The conversation on the phone - it was internal, as far as I could tell - was brief, but brief is still too long when someone requires your attention. I expect this of disinterested late-night petrol station types, but not sales assistants in major high street chains.

Anyway, I got my half-price shades. If I lose these at Wembley I won't mind, as it means we'll have been to Wembley again, this time for a cup final. And we may have won.

I left Boots for Waterstones and got the book too. While browsing the shelves, I noticed also there was a biography of Lorraine Kelly (no, I didn't purchase it) which was sub-titled "The Biography of TV's Best-Loved Presenter."

Now I'm quite a fan of Lorraine Kelly, but that's a remarkable example of overstatement if I ever saw one.
Authored by Matthew Rudd
Email ThisBlogThis!Share to TwitterShare to FacebookShare to Pinterest
6 exclamations of response

The audience of BBC1's I'd Do Anything have, brilliantly, gone for the hourglass Blackpool broad rather than the curly Irish lass in the grand final.

Jodie Prenger, the winner, has spent the entire series singing effervescently, crying uncontrollably whenever someone else got knocked out and being, just, well, dead sporting and nice about it all. I'd go and watch her, and it's the Natural Blonde who likes the musicals, not me. I've only caught this programme most weekends because she's crazy for it. She voted for Jodie a couple of times in the final.

However, as she's a) not a size zero; and b) northern, I cannot wait to see what crap the Daily Mail will come up with about her victory. Amanda Platell, that obvious paragon of svelte gorgeousness and flawless femininity, had a needless pop at Jodie's figure in her column yesterday, while that awfully charmless Pearson woman has laid into Princess Beatrice lately, to the extent that Fergie's had a go back and even Private Eye are backing her.

I tell you, our beloved Clair would be proud of me today...
Authored by Matthew Rudd
Email ThisBlogThis!Share to TwitterShare to FacebookShare to Pinterest
4 exclamations of response