This is F-C, hiding behind his choice of holiday reading matter.

A superb It's A TV Cream Christmas! evening on Tottenham Court Road last night, with attendees including him, him, him, her, her and him.

I have photographs of bloggers pretending to be in love, doing impressions, sleeping drunkenly and generally arseing about. I drank lots of Guinness and spent most of the evening chastising Phil jealously for being a) immensely photogenic even when he pulls a face; and b) in possession of the most alcohol-resistant liver that human biology has ever created. He should be cloned.

Somebody brought in a freebie DVD of the Flying Doctors. It's probably still on our table now.
Authored by Matthew Rudd
Email ThisBlogThis!Share to TwitterShare to FacebookShare to Pinterest
5 exclamations of response

"Sorry, can you just pass me that two pence piece, please...?"

Got a train to catch soon to join the other TV Cream staffers (and half of blogdom) on our Christmas shebang in London. Ahead of discussing the canned laughter on All In Good Faith and whether Bertice Reading was being 'worked' underneath her Blankety Blank chair, I just have time for a few more random irritations that have got me lately:-

1: National presenters/hacks saying they are "up in Manchester" (or Leeds, Glasgow etc). You're not "up" anywhere, as you serve a country and your regular base, or your situation away from your work is of no relation or consequence to your port of call when on air. Your northern listeners are not "up" like you, but you are "down" in London or the Home Counties to them. Would you say that? Of course not. Stop it now, please.

2: Journalists being clichéd on soap operas. According to all continuous serials on our television sets, every journalist, even the one predominantly occupied with flower show results on the local weekly pamphlet, is a scheming, heartless, Machiavellian, instantly unlikeable scumbag who nobody whatsoever trusts or wishes to talk to. Whatever flaws I have in my personality, I found that even the bereaved or the aggrieved were polite and courteous when I had to doorstep them, and most would agree to a conversation, on the record or otherwise. The female hack asking about Liam Connor's death on Coronation Street was treated with utter contempt when she turned up for reaction - but if nobody's in court to report on Tony's eventual trial (I assume there will be one) then everyone would be very pissed off.

3: Dropping change from a card wallet. I don't use a money wallet, just one for credit cards and the like, so my loose change often gets stuck on the wallet sleeves. Out comes the wallet to retrieve a card and instantly there's a multiple pinging sound as a pile of five and twenty pences go flying across the floor. That's embarrassing and I'd like it to stop.

4: The voiceover for Come Dine With Me. You are sneery and unfunny and irritating and I want to turn the sound off.

5: Fans of other Premier League clubs still assuming the Hull City bubble will burst. Actually, you carry on feeling like that, as it just means we'll take points off you too.

Right, I can see the guard waving his flag. Have my favourite Christmas song until I get back...

People are still arguing about Strictly Come Dancing's decision not to eliminate anyone last Saturday. For Cliff's sake, it's perfectly simple - the judges tied two contestants at the top, meaning that even if the whole bleedin' universe voted for that smug Holby City bloke, he would not have avoided the dance-off. Therefore you'd be throwing your money away voting for him to remain. The BBC seem to be damned if they do and damned if they don't.

The contest should have three finalists anyway, so they've done the right thing on that score too.

Next year, some changes. Give the couple who top the judges' board an automatic place in the next round. Make the public vote for who they want to get rid of, not save. Decide if it's a dancing contest or entertainment contest and adjust the power of the judges' or public's votes accordingly. Have a back-up plan to separate tied contestants, such as the biggest number of 10s awarded (then 9s, then 8s, etc). Don't hire anyone to take part who has the personality of a skirting board. And make sure Karen Hardy dances with someone good/likeable so we actually get to see her a bit.

And as I first said here, Lisa Snowdon to win. It's gonna happen.
Authored by Matthew Rudd
Email ThisBlogThis!Share to TwitterShare to FacebookShare to Pinterest
1 exclamations of response 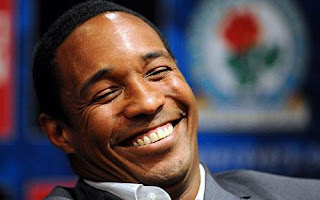 I'm inclined to sympathise with Paul Ince, a proud footballing great who has been sacked by his club, Blackburn Rovers, after a mere 17 games in charge. The LMA are livid, rightly, while general consensus is that football is simply too cut-throat to be fair these days, and you cannot judge a man's ability on the strength of just 17 games.

Then I remembered that Hull City sacked Phil Parkinson after a similar number of games - and a similarly paltry win ratio - and hired Phil Brown. Within 18 months he'd not only cleared up Parkinson's mess, but taken us to promotion.

Sorry Paul. It's a rotten world.
Authored by Matthew Rudd
Email ThisBlogThis!Share to TwitterShare to FacebookShare to Pinterest
0 exclamations of response

"We prefer to call it Gallic, not Gaelic..." 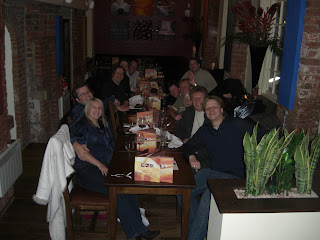 Another radio boys night at the weekend, this time we chose Leeds as the venue for our eating, drinking and swapping of anecdotes about jingles.

To be in the company of Charles Nove, Alex Lester and Martin Kelner while they tell stories is like having a front row seat or an exclusive interview. I wish I could relay just one of their tales to you. I can't for reasons of a) discretion; b) loyalty; and c) libel. Let's just say that (literally) invisible BBC staff, an engineer's secret tape recording, getting the local lingo in Scotland wrong and the phrase "she was always capable of night-time adventure" were randomly scattered about the pub while the rest of us laughed.

I've never met Martin Kelner before but I'm a longtime fan. I used to enjoy his BBC night-time network programme on the local stations up here, and he is always the best thing about Fighting Talk on 5 Live whenever he is recruited. As with the first time I met Alex, and for that matter Richard Allinson, I happily and unashamedly began my first conversation with him by telling him of a time I'd corresponded with his programme, expecting him to remember instantly. He did. He may have been acting politely, mind...

The restaurant was a new Italian joint, which looked after us well (despite only 12 people turning up for a 20-strong booking) although it was one of those places that liked presentation as much as it valued taste. As a consequence, my fillet steak was excellent, but when the menu said it came with chunky chips, I didn't realise they meant five solitary French fries which were each the size and shape of housebricks, and all piled on top of each other. My builders would have been tempted to cement them together.

Our final drinking location was the bar at the local Jury's Inn hotel, which initially looked us up and down at the door - having supposedly adopted a policy of hotel guests in the bar only - before agreeing to "15 minutes only" for us in their bar. As raucous as our collective lives may have been in the past, I was surprised that this self-important doorman could believe that Alex and Charles were potential rioters in his precious hotel. Anyway, we stayed an hour and a half in the end before the hay finally beckoned. A fab night.
Authored by Matthew Rudd
Email ThisBlogThis!Share to TwitterShare to FacebookShare to Pinterest
0 exclamations of response