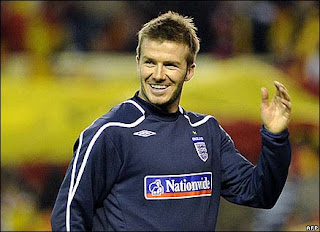 I'm utterly bored of old footballers doing all they can to devalue David Beckham's achievement of equalling their old mucker Bobby Moore's record of 108 caps for an England outfield player. Moore's pals have, pretty much as one, denounced Beckham's tally because "only" 99 of these appearances for his country were from a starting role, with the other nine - including the all-important leveller against Spain last night - coming as a substitute.

Moore won his 108 caps between 1962 and 1973 and was never once a substitute, nor was he ever substituted. That's good. He did, of course, lift the World Cup as captain in 1966 too - a fact even the biggest non-footballists in the world (a chunk of whom are linked to this blog) won't have missed in the nigh on 43 years to have passed since.

Nobody is trying to claim that Beckham is in some way worthier than Bobby Moore just because he has equalled his record and will almost certainly break it when England play Slovakia in a World Cup qualifier next month. But too many crusty old guard figures, from the playing fraternity and the press box, are trying to find a way to preserve Moore's attainment by actively talking down Beckham as both player and human being.

Moore died in 1993 and football worldwide rightly mourns him to this day. Yet presumably were he alive today, he'd fulfil the portrait of the man of honesty, honour and integrity which those who knew him paint, and therefore upon Beckham equalling his tally he'd have said: "Well done, David." Moore's apologists try to enhance the man's perfect image further by tarnishing Beckham's, though while Beckham's use as a player, at the age of almost 34, to the England cause can be widely debated, his attributes as a man and a patriot can scarcely be questioned. He's a proud Englishman, a decade married, devoted to his three sons and still as determined to achieve things in his life despite a colossal bank balance that nobody reading this could ever imagine.

He went to America because he was told by that berk Steve McClaren that his England career was over, so it was time to do something fresh that a man of his stature could achieve. However, when Fabio Capello came in and slowly restored him to the squad, Beckham began looking for a higher class of football to cement that place and so now is on the verge of joining AC Milan full-time after looking terrific in a loan spell. Yet the same people who criticised him for taking the American bucks and looking for an easy retirement are now having a pop at him for trying to revive his international chances with a return to a high calibre European league. They should give the lad a break.

The argument about substitutions is a misnomer too. Moore was skipper for almost all of his international career and therefore if fit, played. It was as straightforward as that. Plus, for some time until the late 60s substitutions were not allowed in competitive international football and only rarely used in friendly internationals. Had the opportunity to use subs been available, there's no doubt that Jimmy Greaves and possibly one more player would have come on in extra time in 1966.

The old boys can't claim some kind of high-ground by saying their game was without substitutes while also complaining, at the time, that many FA Cup finals of the 1950s and 1960s were ruined as spectacles because someone suffered a serious injury during the game, seriously diminishing their team's chances because they either stayed on the pitch in agony (and/or out of position) or went off, leaving ten team-mates to battle it out as there were no subs.

Beckham has plenty of detractors but he has always put playing for England ahead of absolutely everything else and to that end, he is more similar to Moore than any of Moore's chums would dare claim. He wants to be one of England's greatest ever players and there's no reason why we shouldn't regard him as such. Nothing will take away Moore's achievements, so let's just stop being so snooty and offer Beckham our congratulations.
Authored by Matthew Rudd
Email ThisBlogThis!Share to TwitterShare to FacebookShare to Pinterest

I wouldn't mind the 108 caps if he was actually any good and worthy of them.

We'll have to agree to disagree on Beckham, I think.

I knew you wouldn't be far away from this post once I published it...

Beckham is still good enough, in my opinion. Not so in yours. That's fine - I reckon there's an evening in a pub halfway between Hull and Newark to be had for this debate.