They loved it really

It's been ages since the dogs have featured on here, so when we decided to brave the wretched snow yesterday and go for a run, I took the camera along. This is my favourite pic... 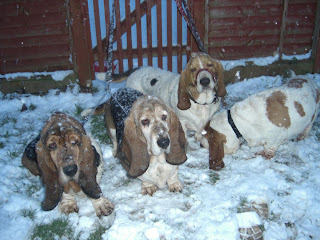 ... because it sums up the Basset personality entirely. Bentley and Penny, to the left, sport that "I know I look sad but I'm actually having enormous fun, honest" look which is symbolic of the breed, while Ruby is equally symbolic by steadfastly choosing to ignore my plea for her to look at the camera, despite my biscuit bribery efforts, because she'd found something far too interesting to nuzzle from beneath the white blanket to bother about her daddy.

Meanwhile Boris, masked and looking slightly fed up, managed to pee on a snowman during our run round the field. This wouldn't be anything abnormal, only a child was still building the snowman at the time.
Authored by Matthew Rudd
Email ThisBlogThis!Share to TwitterShare to FacebookShare to Pinterest