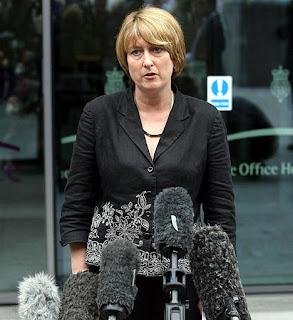 Jacqui Smith really is a card, isn't she? Not only is she making a mockery of the expenses system by claiming briefcases full of our money for a house she neither owns nor lives in, but now a claim has been made to pay for two blue movies viewed at her house.

Of course, she wasn't at home when the films were ordered and viewed, says her spokesperson. Actually, I suspect it'd have done her more good if they'd said she had been home, and she and her husband had enjoyed a right good evening of squelchy conjugals while watching skin flicks that Richard Desmond had funded.

After all, the press have never been able to take her seriously as Home Secretary because they noticed on the day she was appointed that she was rather blessed in the chest area and duly focussed, in that charming tabloid way, on her physical assets rather than any intellectual or moral dynamism she may have possessed. Given that we've subsequently established she is in fact entirely lacking in both intellect and morals (and scruples, honesty and competence), she's probably best off flaunting her visual attributes and adding that she frequently enjoys watching naked romps with her husband. She'd stay in a job for life (or at least until her party is removed from power).

Of course, she has done what all red-faced women would do in these situations - she has blamed her husband for the pornographic misdemeanour and the quote says she "gave him a good ear bashing". Oooh, the possibilities for misinterpretation there are endless... if it had been a "tongue lashing" instead then we'd have been in paradise.
Authored by Matthew Rudd
Email ThisBlogThis!Share to TwitterShare to FacebookShare to Pinterest

Someone who's not a fan of Jackboot Jacqui said...

Of course, the state-subsidised wanking of Mr Smith - who is already paid £40,000 of OUR money from her "expenses" - is unappealing. Though if I was married to her...

But let this not detract from her noxious policies, which would ruin the country long after she's no longer an MP - which incidentally, will be the day after the next election, given her slender majority in Redditch.

She is the woman who wants us to pay to carry around ID papers, another part of New Labour's Stasification of the country. Her anti-terrorism laws are not to oppose terrorists, they are to subjugate the rest of us in a way the communists may have thought a trifle excessive.

She's a despicable authoritarian harridan who escapes censure because she's a fat ugly bitch who looks a bit like everyone's simpleton aunty, when she's actually a truly evil hag who should be burned at the stake. Preferably live on television.

Ooooh dear, seems one of the movies was Raw Meat 3 - a gay film. This will undoubtedly call the marriage into question...

"She is the woman who wants us to pay to carry around ID papers"
No, no, no. Don't you remember? People are so keen to have these cards that they keep approaching her in the street and saying "Jacqui, I can't wait for it, when can I have mine?". This must be true, 'cos she told us so. Maybe they were just over-excited by the cleavage and had something else in mind.