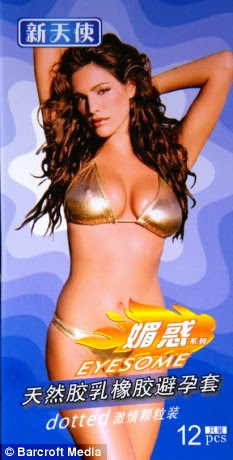 It amuses me that a Chinese contraceptive firm has used a picture of Kelly Brook on its condom packaging without her permission.

It amuses me more that her management company are now "looking into" the unauthorised endorsement.

What on earth can they do? If they publicly dissociate Brook (the most sexless woman ever to be given sex symbol status - on Strictly Come Dancing she had the physical appeal and charisma of a chisel) with the product, then it would be easy for folk to trample on her as someone who doesn't believe in safe sex.

They can't withdraw the product as the stable door has long been ajar. China is a big place. People will have bought these contraceptives. And as she's clearly an unknown there, people will just wonder what the fuss is about prior to spotting an ego on a nonentity.

No, stay well clear. Actually, given that the photo seems to be pushing ten years old, it may do her some good. She looked okay back then. This isn't necessarily a surprise, given that we can all look better with ten years shaved off our lives (apart from Dannii Minogue), but the only time Kelly Brook "did it" was when she was modelling and keeping her mouth shut. Remember the Big Breakfast fiasco? Ooooch. Downhill thereafter.

The best celebrity non-endorsement I recall was featured in the press a good decade or so ago when a photo of Anthea Turner - and I mean imperial phase, Flake-scoffing Anthea of National Lottery and GMTV plasticity - was used by an eastern bloc country on an advert for sex lines. Now while I can at least acknowledge that lonely, single Bulgarians may well have been forced to reach for the telephone as their only means of getting their basic kicks, one sight of that ubiquitous Turner grin would surely have flaccidised them for a lifetime. Still, at least they didn't have to listen to her too...
Authored by Matthew Rudd
Email ThisBlogThis!Share to TwitterShare to FacebookShare to Pinterest

I disagree with the lack-of-physical-appeal thing. I once walked past La Brook at work (she wasn't wearing anything special: jeans and a tracksuit top if I recall) and she is one of the most jaw-droppingly beautiful people I have ever seen. On and off the telly.

Maybe so, but she is dimmer than a factory full of adjustable lightswitches.