Long to Wayne over us 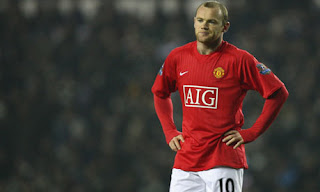 Rooney is a born and raised Evertonian who played for his boyhood club.

He then joined Manchester United.

Rooney declared his hatred in an interview on the Manchester United website yesterday. A few hours later the comment was pulled but, it would appear, the "damage" has been done.

Oh forgawdsakes. There is no damage. It's not as if Liverpool fans were going to treat Rooney as a knockabout lovable Scouser, one of them, had he decided not to make this comment.

When Rooney goes to Anfield, he is treated like a total scumbag.

Evertonians don't like Rooney now, because he had the gall to leave his boyhood club and join one which has brought him global riches, fame and - the key factor for any self-respecting footballer - medals.

And Everton got an absolute fortune for him.

When Rooney goes to Goodison Park now, he is treated like a total scumbag.

It's hardly surprising he kissed the badge there earlier this season, though clearly it was a moronic thing to do and even his manager, Sir Alex "it was nice to knock Liverpool off their f**king perch" Ferguson accepted that and promptly subbed him.

Rooney is a masterly footballer but his mouth is an issue. Yet there is far less grief to be had from a "no shit, Sherlock" comment in an interview designed only for Manchester United fans than there is from the way he monsters and abuses referees week in, week out.

If only the authorities would get worked up about that. He gets away with far too much on the pitch.

But having a go at this youthful, gifted Scouser for having exactly the same feelings as the Evertonians he grew up with and the Manchester United devotees who pay to watch him is entirely pointless.

He should be congratulated, in some ways. After all, footballers are often accused of being out of touch with the supporters. This comment proves Rooney is still very much thinking what the fans are thinking.
Authored by Matthew Rudd
Email ThisBlogThis!Share to TwitterShare to FacebookShare to Pinterest