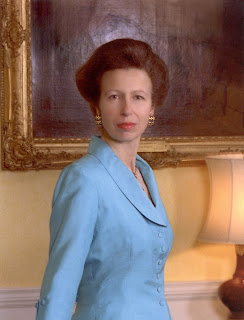 The last great bastion of old-style sexism, the monarchy, seems finally set to change its ways. And about time too.

I've always found it remarkable that while the world's do-gooders have correctly obtained equal rights for women in every other aspect of life, the ancient tradition of keeping out royal women by any possible means has never been discussed, never mind touched.

And because her uncle was a Nazi sympathiser, but that's another issue entirely...

If they introduced equality for blue-blooded ladies right now, it wouldn't change a lot. It would simply mean that if Charles popped it before his mum - and, given how long his maternal granny clung on for, this can't be ruled out - then his sister Anne would be next in line, rather than his brother Andrew.

Immediately, you're saying "No, it'd be William!" But no, William can't be King unless he directly succeeds Charles, in the same way that had Elizabeth done one prior to George's death in 1952, the four year old Charles wouldn't have become King - it would have been Margaret. Now that would have been interesting - a soak Queen obsessed with fags, tropical islands and Peter Sellers.

If she did, she'd be above the law and be able to do 112mph whenever she liked.

It would also mean we'd have a royal consort who, unlike the current incumbent Prince Philip, could walk down the street without a single person (except Richard Kay and James Whitaker, which is easily remedied by simply avoiding streets that contain Richard Kay and James Whitaker) having the foggiest who he is. To have such power and riches and yet such anonymity would be ideal for Commander Tim Thingy. That's unless Anne doesn't think he's consort material and sacks him off in the same way she did Mark Phillips.

And it would also make - at least until Peter Phillips and his wife reproduce - Zara Phillips second in line to the throne and a former England rugby player - fart lighter extraordinaire - a potential Queen consort. Let's face it, if fate can get Mike Tindall that close to being an HRH then there's hope for us all.

This could be the just what the Royal family needs. Yes, the sexism is an issue that should be sorted but beyond that, it would inject some real fun into the monarchy too. Queen Zara and King Mike, anyone?
Authored by Matthew Rudd
Email ThisBlogThis!Share to TwitterShare to FacebookShare to Pinterest

It's high time they moved into the new millennium. I'd like to see Queen Anne. She'd be great. And she does interviews.