"You're going out the world backwards like you did when you first appeared..." 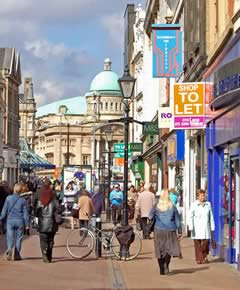 I was doing a spot of city centre shopping yesterday. It's not something I do often but it is something I rather enjoy as Hull has become, in the last 15 years or so, a great city centre.

Having bought some new trainers and also a birthday present for my nephew's impending 11th, I got a tad peckish. I bought a pasty from the Greggs on Whitefriargate and sat down on one of the pensioner benches.

It's always interesting to watch and listen to the world go by while you sit on a central bench in the middle of one of a city's busiest pedestrianised streets. The most interesting sentence I heard from someone as they conversed their way past me with their friend or relative, oblivious to me and other earwiggers, was this:-

This was from a seemingly active, if limited in vocabulary, young chap in a garish white tracksuit. He was about 24. I don't know the context of the above quotation, of course. Maybe he has an appalling back injury and is being mistreated by the DSS while he struggles to find a way of returning some peace of mind and personal pride in finding suitable employment. If so, my sympathies are with him.

I doubt it though.

My initial reaction, which I almost blurted out loud, was to shout: "Well, get a job then. Get. A. Job. You know what a job is? It's where you fulfil a set purpose under employment laws and in return receive financial remuneration. You could do anything. File stuff away at an accountants. Do the photocopying at a solicitors. You're about to walk past a branch of Birthdays which has a notice advertising for staff on its glass door. My local chippy needs a server. I know there's an increasing unemployment list, but there are all sorts of jobs still out there designed for all sorts of people."

I didn't blurt it out, of course. I merely thought it. But there is a number of people in the UK - a number which boasts a fair few noughts, I'd reckon - who are in precisely the same situation as this young man; ill-educated, a respect vacuum for themselves or anyone else, who assumes that the world owes them something because they're here. Stopping benefits is a draconian measure, and as I said I don't know the context of the one line I heard from him as he scowled and scuffed his way past me as I munched my pasty, but sometimes a shock tactic may be the only way of getting some of these malingerers doing what the rest of us do.

The pasty was nice, by the way. Sausage and cheese melt, highly recommended. Then I bought a new shirt and some toothbrush headers and then went home.

EDIT: PS - the above photo is actually Whitefriargate.
Authored by Matthew Rudd
Email ThisBlogThis!Share to TwitterShare to FacebookShare to Pinterest

I reckon people like tracksuit boy should be made to work or benefits stop. The trouble is, he's a lazy fucker and thinks any work is beneath him, so there's the rub.

Stopping benefits is an obvious answer, but a wrong one. Because there really are some people who need them, so then you're stuck in a bureaucratic mess of trying to separate the Deserving from the Scroungers, getting it wrong half the time, and nobody is happy. In fact that's pretty much where we are now.

How about extending benefits - to everyone? Working, self-employed, moonlighting, jobless, retired - makes no difference - everyone gets the same handouts? Sure it'd be expensive on taxes, but at least you'd get some of the money back. And it'd be way more efficient to administer.

Your experience sounds just like my town centre experience in Doncaster yesterday. Too many people with nothing better to do loitering round and making many a shopper feel rather uncomfortable.

When I came away (after meeting the wife for lunch and doing the little bits of shopping we needed to get done), I didn't feel like I wanted to visit again anytime soon. This saddened me because it is the town where I am originally from and for years where I have spent the most time and the town centre I know the best (like you with Hull).

I fear that I'm becoming a bit snobbish and don't really want to spend a great deal of time with these types of people, purely because they make me uncomfortable.

That's a surprisngly common attitude in Britain, I found on my last visit. Having lived in China where there is no welfare whatsoever, I've become a bit hardened to the expectation of handouts (although I must admit I did enjoy them for a few months myself as a student).
Maybe the Uk should introduce some form of work for the dole system.