The Clough gets going 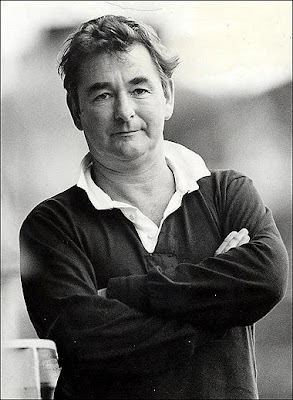 I've not been to see The Damned United, despite my deep interest in the subject matter, because I simply can't do cinemas. I'll wait for a televised showing or the DVD. The shadow of Kingpin lives on...

It's nice to read reviewers and bloggers (try F-C for starters) state their fascination or admiration or empathy with Brian Clough, despite being self-confessed non-footballists. I never watched any team I followed, either with heart (Hull City) or through work (others), against a Brian Clough side and that is a genuine regret.

The thing I love most about Clough is the wonderful paradox between his personality and his work. For all his bluster and ego, his charm and arrogance, he was a man who encouraged football in its simplest form. Pass and move, keep it low ("if God had wanted us to play football in the clouds he'd have put grass up there"), always maintain possession and don't be afraid of making the ball work for you. He didn't complicate things because he felt the game deserved to be viewed in its purest form. The fact that entertainment was a priority to him, when we consider just how much playing for the crowd is sacrificed today for asphyxiating football that benefits only the fearful coach playing for percentages rather than plaudits, says everything - and the fact that he won League titles, European Cups and League Cups without altering his principles shows him off for the genius he was.

His emphasis on discipline and self-respect was evident too - rarely were his players booked and almost never was there a sending off, while Roy Keane famously got bollocked and dropped after committing the heinous crime of celebrating a winning goal in an FA Cup quarter final tie by turning a single somersault. It was not the way to conduct yourself, even in glee, concluded Clough.

His other big principle would make players baulk today - the acceptance of refereeing decisions, even if they were blatantly wrong or expensive to his team's chances. Two infamous incidents leap to mind; when a referee gave a penalty that wasn't in the 1984 UEFA Cup semi final which ended Forest's long run in the competition; and the notorious pair of clattering tackles Paul Gascoigne put in on Forest players in the 1991 FA Cup final. For all the injustice, nobody complained on either pitch at the time, and while Clough voiced his disappointment afterwards (much longer afterwards), he put the decisions down to human error which referees had to be entitled to make.

The fact that the 1984 ref took a bribe from Forest's opponents, we later learned, was neither here nor there at the time...
Authored by Matthew Rudd
Email ThisBlogThis!Share to TwitterShare to FacebookShare to Pinterest