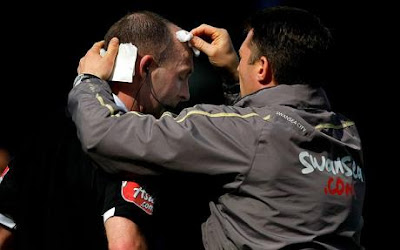 I wonder what punishment will eventually go Cardiff City's way after the despicable coin-throwing incident of last weekend's Wales derby?

The referee, Mike Dean, was hit on the head by a coin - a pound coin, no less, so the Welsh prat who threw it must have been flush - and suffered a bad cut. He noticeably lost his balance and had to hold on to the Swansea City player he was speaking to at the time, who immediately saw the rushing blood and called for medical help.

When some lunatic Italian threw a coin at Anders Frisk in a Champions League tie a few years back after he had the gall to send off a Roma player, Frisk was so badly cut that he was unable to continue and, afterwards, he retired forthwith from refereeing. Roma were hit hard, conceding the tie 3-0 and being told to play their next two home matches behind closed doors. The money lost from a Champions League exit and two gateless matches is substantial.

This is something that needs to be meted out to Cardiff City - the docking of points and the closure of their ground for a match or two. They have a renowned hooligan element, who don't let anything like Welshness get in the way of their targets. They misbehave everywhere they go, publicly and shamelessly, and not enough is ever done about it. I don't suppose for a moment that the coin was aimed for Dean, who was not having a controversial time of it at all, but the Swansea player to whom he was chatting during a break in play. However, there does seem to be an extra impetus on getting the culprit and punishing those responsible when an official, rather than a player, is the victim.

Fans are often the party who feel the punishment when a club is docked points, even when it is not their doing. Luton Town fans booed Lord Mawhinney of the Football League as he shook hands with their players at Wembley on the same day as the Cardiff horror, as the League were responsible for taking 30 unrecoverable points from them at the start of the season for various administration and regulation blunders, thereby ending their season - and guaranteeing the lost of their Football League status - before it had even started. This is a prime example of when clubs get punished for the actions of buckmakers in charge who care nil about the club itself, and the supporters - the thick and thin travellers and emotional investors - feel the real heartache from it. It still stinks to high heaven.

But when a fan is responsible for the transgression - and this always mean violence or some form of disorder - then the only way to prove it is taken seriously is to hand out a punishment that affects this idiot's fellow fans. Maybe if Cardiff City, an ambitious club with a good manager, are denied a play-off place for the Premier League as a direct and clear consequence of one crazed man's actions then the rest of their hooligan element, assuming they do care for their club in the way they care for making bother, might finally start to grow up.

If Luton, who at least won the Johnstone's Paint Trophy at Wembley and therefore have something tangible to show for this season, can be docked 30 points and basically sentenced to a slow, agonising and humiliating death for essentially ticking a few incorrect boxes on a form, then Cardiff City can be docked any wild number of points for further ruining their already rubbish terrace reputation by allowing someone into the ground whose intention was to injure a participant on the field of play. If just a fine is handed out then the world, and football in England, has gone utterly insane.

For his part, Mike Dean went up in my estimation. He's a referee who sometimes gets it wrong on the pitch and I've felt directly hurt by decisions or non-decisions of his in the past, but I liked the fact that he let his emotions go and slammed the coin down on the turf in pique as he received treatment from the physiotherapists.
Authored by Matthew Rudd
Email ThisBlogThis!Share to TwitterShare to FacebookShare to Pinterest