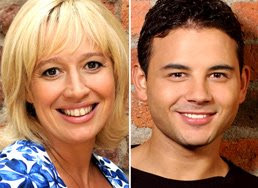 So then, Coronation Street has broken the last taboo and has incest as a storyline.

There will be guardians of our values who will, via the right wing press, wail and gnash their re-whitened teeth at this, but at least it surely means that the dreadful Colin Grimshaw won't be around for much longer. He's no Ted Sullivan and I'm astonished that the writers believe that Rita, a woman always so protective of herself from any potential beau with a masterplan, would happily take his name and essentially sign her nest egg over to someone who was portrayed from the start as a chancer and charlatan.

I did initially wonder whether it was absolute necessary to have Jason and Julie sleep together before the truth came out, as Julie's sourfaced mother had been looking daggers at the Grimshaw grandad for weeks, making it quite obvious what was ahead; the sort of clanging "hey, and then guess what?!" moment my despairing father would say, mid-snore, that he had written while sitting on the toilet. But then I suppose she would have told Julie had she been present in the pub when her daughter got her claws into a reluctant but inebriated Jason.

Instead, she found out through idle gossip (of course) and even then wouldn't tell Julie the truth unless she knew for definite that they had done the evil deed. Ultimately, of course, it wouldn't be soap (or drama as a whole) if she didn't eventually reveal all to not just Julie but the whole pub at Colin's 70th birthday do, leaving Eileen feeling aghast, the freshly-engaged Rita heartbroken and Jason just plain unclean as he densely worked out he'd just hidden the sausage with his aunt. It was terrific.

What was more terrific than any of this climactic bluster, however, was the touching scene of wonderful understatement between Rita and Norris as the pompous old get warmly wished Rita well, despite his disapproval of her liaison with Colin, and told her he would always be her closest ally. With the revelation that followed, it secures for the viewer the added relief that Norris will not be going on any pan-Europe jaunt in the camper van with Mary, but instead continuing one of the best comic partnerships in soap for a good while longer.

And one last Coronation Street compliment, as an unrelated aside - Fiz is absolutely brilliant.
Authored by Matthew Rudd
Email ThisBlogThis!Share to TwitterShare to FacebookShare to Pinterest

Brookside did a brother-sister incest plot many years ago, but the naughty siblings were both such horrible characters anyway that most of the 'taboo impact' got deadened by their ghastliness.

Yes, and that really is the incest taboo par excellence, if that's not too contradictory a phrase.

EastEnders have done two, as I recall - a retrospective one (Kat, Zoe, Michael Elphick) and a very-nearly one (Bianca trying to seduce David). Notice that Corrie's script last night dictated that Julie and Jason didn't do the dirtily dirty deed after all as they were both too bollocksed. On the one hand that's good, on the other it's a total cop-out.