"Do like the others do, and don't you drag your heels..." 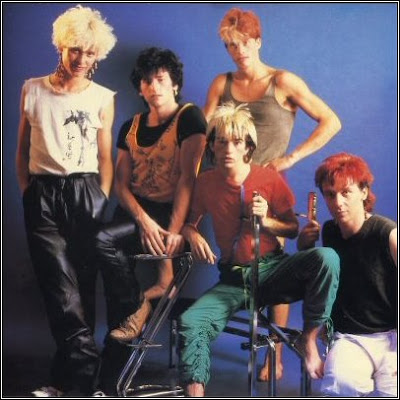 Let us not forget that Kajagoogoo were once a highly-prized art band, instrumentalists whose early work was acclaimed and even got them a Peel session.

While the ribbing by hacks of the announcement of the band's reformation is largely sneery (and evidently done by youngsters whose disparaging view of anything at all from the 1980s is set to automatic), it is one of the less impressive reunions.

Kajagoogoo had three hits, but even though Too Shy was a number one single, it remains a very boring one, with a catchy chorus and a very smart, best-of-a-bad-job production by Nick Rhodes shrouding a ditchwater pair of verses, an intro that goes on forever without actually reaching anywhere and no discernible middle eight or key change.

Having got to the top, they had a row with Limahl and sacked him as their singer ("I've been betrayed!") and installed Nick Beggs, the bassist with the car seat cover sewn into his head, as replacement. As it turned out, 1983 was their breakthrough year and their only year of stardom. It says a lot about their impact that despite three Top 10 hits that year, they're regarded by default as one hit wonders.

They dropped the 'googoo' from their name in 1984 and got nowhere, splitting thereafter. Limahl's solo career fared little better, with only Never Ending Story achieving anything resembling success. By the mid-1980s the News Of The World was running a story that he was claiming the dole.

The only reason Kajagoogoo invoke any memories at all is because they sacked their singer, the bloke they hired to turn them from skint art band into pop superstars, after their No.1 hit - a No.1 hit where few people still know the verses. For all the politics going on, it was still a staggeringly daft decision.

I'm as impressed by this reunion as I was by that of Spandau Ballet, although at least they had something resembling a shelf life.
Authored by Matthew Rudd
Email ThisBlogThis!Share to TwitterShare to FacebookShare to Pinterest

At the time, I quite liked Ooh To Be Ah. Maybe it was Kenny Everett in the video that appealed.

...but I couldn't give a shit that they've reformed. I hope they lose more money on this venture - that'll teach them.

Talking about Spandau Ballet, I was never a fan, but I was surprised at how err... tight their performance on Jonathan Ross was a couple of weeks back. Tony Hadley really is a ridiculous man. He reminds me of that blue eagle off The Muppet Show.