"I haven't been able to give up McDonalds yet..." 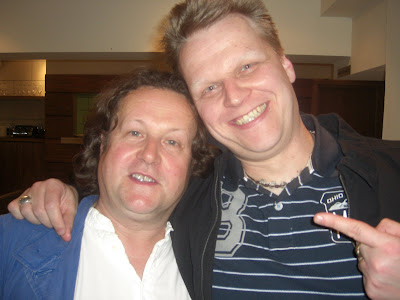 The weekend's gone all to cock. My joy at Hull City's survival demanded an instant response upon returning to blogland, but before all that hellish tension of the leather sphere, there was the latest Nerd Night. I'm doing all this in the wrong order.

The Nerd Night is a phrase coined by the great and good Alex Lester for the bi-monthly (though this time we had to wait a third month since the last one) gathering of broadcasty types for discussion of the industry, swapping of gossip, anecdotes and memories.

We were back in London for this one, which meant Alex could invite a stack of his colleagues. I was working in Stockport and so flew down from Manchester immediately after the show. This was greeted with camp "ooooh, get you" exclamations from people I knew, even though the flight was cheaper than our hideous, scandalous excuse for a railway system and was further enriched by the knowledge that the tracks were being repaired part of the way over the Bank Holiday weekend.

I'm not an experienced flier and I have zero experience of actually booking flights or finding my own way around airports, so my good friend Martin Emery almost had to hold my hand as we went to Terminal 5, then check-in, then security and then paid half an MP's moat clearing bill for fish fingers and chips in the departure lounge while scanning the screen. At security, I had to remove my belt and empty any keys from my pockets but, gratifyingly, was not required to give them money or jewellery. You are reading the words of a man who left his wedding ring in an Egyptian security box while negotiating his return from honeymoon, and only the eagle eyes and honest nature of a balding man from Doncaster prevented a quickie divorce.

I took my passport, which the online booking form advised, even though it was a domestic flight and I wouldn't be leaving British shores or, indeed, British airspace. Not once was my passport asked for, thereby making me risk losing it when its presence on my person was entirely unnecessary. I also want to know why the safety instructions on these domestic jollies include the life jacket procedure. Are we going to plunge into a swimming pool? If so, I'll take my chances. And maybe my trunks.

The flight, and my consumption of that day's Daily Mail, took roughly the same length of time. I was staying at Alex's central London flat and was responsible for gathering the non-BBC types (ie, everyone who Alex didn't work with) at the same place. Rapidly losing my mobile phone battery thanks to a dodgy connection within the charging socket meant this was proving difficult, but almost everyone managed to receive a text or call prior to the damned thing conking out entirely and leaving me uncontactable for the night.

So it was to the Stags Head, close to the BBC, for a swift intake of beers, prior to a 7.30 booking at a branch of Ask a street or three away. I'm a sucker for Italian food but Ask always lets me down - expensive and not exactly generous with the portions - yet it was the best option for people coming straight from working for the licence payer. We had a good 20 or so folk sitting at one long table. My abiding memory of the conversation that took place was telling BBC Radio Berkshire's Rory McAllister that no, I was *not* Alex's regularly-mentioned-on-the-wireless friend known only as Libido Boy.

We had the grand total of three ex-Radio 1 DJs with us. Charlie Jordan, who is still absent from Radio Rewind thanks to some ghastly oversight on their part, was joined by her pal Clive Warren, and my old mucker from the Viking days, Joel Ross, turned up. Joel is staggeringly entertaining company, be he in drink or not, and he proceeded to become an effortless life and soul of the party for the duration. When the majority of us finally gave up the ghost at about 1.30am at the Northumberland Arms - a shot put away from Warren Street tube station - Joel and our reluctant pal Simon Hirst were heading elsewhere. The Facebook update afterwards failed to give details, although they were happy to reveal that they had a 4am footlong sandwich from Subway prior to hitting the hay. 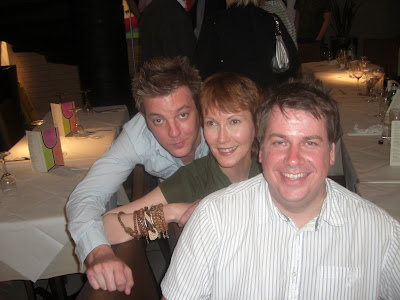 Every other hour I seemed to wake up on Alex's settee and try to get my mobile charging again, finally achieving some life from it at 8am, shortly before rising to devour a hearty breakfast from his local greasy spoon. However, it was disappointingly shut, so we had to pay three quid more for a smaller fry-up from one of those French chain eateries further along.

Alex accompanied me back to Heathrow - Martin was returning later than me, which meant I had to negotiate an airport alone and needed wetnursing - and we were merrily nattering away on our Piccadilly Line train when, at one of the Hounslow stops, a man with a wooden triangular thing got on our carriage and, as soon as the journey recommenced, announced in a loud voice and about six different accents at once that he was here to entertain us on our journey. He then added the caveat that he would not perform if anyone chose to object and Alex, in a distinctly un-British way, promptly but politely declared that he would like to travel in peace and quiet, please. Good on him. I've never seen anyone do this before, and I do still wonder exactly what this triangular thing would be were the man permitted to play it. It looked like a metronome but it was missing the ticky pendulum bit, which I suspect is rather crucial in the metronome world.

I got to Heathrow and managed to do check in without too many issues - I know I sound a dweeb, but I've genuinely never done it before and an airport is an easy place to get lost in - prior to waving farewell to Alex and going for a wander round the shops while waiting for the flight to be called. There were, according to the accents I heard in all the stores, seemingly hundreds of Americans in Heathrow on that Saturday morning. I had one small suitcase which I'd checked in, and had absolutely no hand luggage at all. I suspect it's rare that someone walks on to a flight, even a domestic one, completely empty handed.

Upon arrival in Manchester, I collected my case and headed for the car. No fewer than four cars on the row where I was parked had stickers on them saying "UNTAXED VEHICLE - PLEASE DO NOT ATTEMPT TO MOVE". Clearly the best way to get rid of a car you don't want is to ditch it at the airport.

I drove to my regular B and B in Stockport and fell asleep for four hours, prior to getting ready for the gig. I'm getting too old for this, but I don't care. I'm the host of our next one as we all hit my proud city of Hull at the beginning of August. Wanna come along?
Authored by Matthew Rudd
Email ThisBlogThis!Share to TwitterShare to FacebookShare to Pinterest