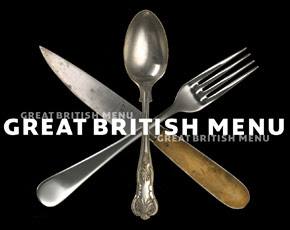 Great British Menu reached its climax tonight and I've really enjoyed the series. People I admire include piano players, sign language exponents and chefs, as they all do something I can't do, but really want to.

The brief this year was to prepare a four-course banquet for hundreds of troops returning home from Afghanistan, with the remit that each course will provide "a taste of home". This meant that the poncier end of a Michelin-starred menu was not called for, more a desire for unique twists on familiar meals and ingredients, with a dollop of excellence spooned in.

Each region had a heat, and so once the heats were done we had eight finalists. The judging was done by three food critics, led by the likeable Pru Leith, who would proffer opinions on each dish's taste and authenticity as a "taste of home". Food critics generally get on my tits, but these three were refreshingly quite reserved in their pomposities and criticism. In the final, each chef made their courses again and each were marked out of ten by each judge.

Then we hit a snag.

The public were asked to vote.

This obsession with interactivity has surely gone too far when the viewers are being asked to spend money voting for food they haven't tasted and never will. At least on Strictly Come Dancing you can make a qualified judgement on who was good at the salsa and who less so. Seven million people weren't ever going to taste the dressed duck eggs, crab salads, beef wellingtons and strawberry textures on show, yet their opinion was regarded as equal to that of three people who a) had expert palates; and b) had tasted the actual food.

Of course, at least one result had to be changed to make the public's expense worthwhile, and so the affable young Welsh chef whose starter was voted top by the judges lost his place at the banquet to the Geordie bloke he had previously shoved into second. The other three courses were all awarded to the chefs put at the top by the judges, thereby making three quarters of the public vote a nonsensical confirmation of what had gone before. One suspects that the Welsh, Scottish and Northern Irish chefs involved had a stack of votes cast their way by fellow residents of their respective principalities, but it wasn't enough, and the Welshman can feel particularly aggrieved that his whole nation didn't vote enough to stop the ginger Tynesider overtaking him. How must the judges feel when a few million amateurs who hadn't tasted the food essentially decided their opinion was worthier?

The starter went to the Geordie (beef salad with horseradish); the fish course to the droll Brummie with earrings and stubble (curried monkfish - yum!); the main course to a lairy Lancastrian (Lancashire hotpot - natch;) and the dessert to a perspiring Darlingtonian who was now a restaurateur on Jersey (treacle tart and clotted cream with raspberry coulis).

The turnover in filming and editing was impressive, as although blatantly a pre-recorded series, the public voting was just for two hours after each episode this week, giving the production team time to gather the result and film each reaction accordingly.

I still won't get much more culinary than a bowl of pasta bolognese, but these guys inspire me nonetheless. I wouldn't mind being at the banquet.
Authored by Matthew Rudd
Email ThisBlogThis!Share to TwitterShare to FacebookShare to Pinterest

We've thoroughly enjoyed watching it too.

And our reaction to the public vote was exactly the same as yours.

A bit like inviting a bunch of blind people to comment on the Mona Lisa based on the verbal descriptions of three critics.

I felt sorry for the one chef who got voted off, although both myself and my wife would have chosen the dish of the one who got through.

But then we didn't taste them.