"It was no infatuation, but a gradual graduation..." 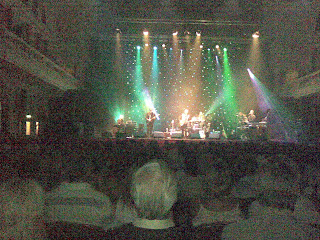 I broke the habit of a lifetime last night and attended a gig. I've never been a gig goer but when I spied a few weeks ago that 10cc were doing Hull City Hall as I walked past the great old building, I decided I'd rather like to see them.

So, last night, a couple of friends and I had a pleasant three hours or so watching one of the more innovative and sharp bands of the 1970s work through their back catalogue.

I was too young to remember 10cc first time round; their first hit was before I was born and their swansong with Dreadlock Holiday happened when I was five. I became mildly aware of some of their back catalogue as I grew up, but when I became a hospital radio DJ at 16 and began to learn properly about the music I'd missed, they were one band that instantly struck. I've been a fan ever since, and most weeks for the last eight years I've driven past the historic Strawberry Studios in Stockport where they made their music, which is now blue-plaqued and makes everyone aware of what once happened within.

There is a new Greatest Hits compilation CD and a concert DVD out and so they're doing some of their old haunts to promote it. I know they did our City Hall in 1975 as it was a gig I researched when I was presenting the 70s Night on KCFM. I looked around the crowd that gathered last night and wondered how many of them had been teenagers in the crowd on that evening 34 years ago.

Now, it isn't the 10cc you may remember. Graham Gouldman is the only original member of the line-up still using the name. Eric Stewart, Kevin Godley and Lol Creme aren't involved and although it's easy to feel disappointed by this, I wasn't especially bothered. It was the sound that mattered, and the songs remain so strong and witty and worthy of performance that the personalities onstage were almost incidental, although without Gouldman it would have been a tribute band and that really isn't the same. Crucially, two of the musicians who worked in the studio and onstage throughout 10cc's heyday - drummer Paul Burgess and guitarist Rick Fenn - are there alongside Gouldman. There are two more musicians, one of whom also acts as the high melody lead singer.

Gouldman began with an acoustic set of the stuff he wrote for other bands as a jobbing composer prior to 10cc - Bus Stop, No Milk Today, For Your Love - and each of the other musicians joined him, one by one. Then, after a long interval, the 10cc set began.

And we got the lot. Look under 10cc in the Guinness Book of Hit Singles and you'll see that nothing was missed out. The severely rock-opera'd version of Art For Art's Sake was a magnificent highlight, while it's tough not to listen to the immortal I'm Mandy Fly Me without wondering why Bohemian Rhapsody got so many more plaudits. The ringing telephone on Donna was taken up by a Nokia ringtone rather than the one-note "ring ring" of 1972 that features on the record.

We also got a couple of album tracks plus Bridge To Your Heart, the jolly single Gouldman released with Andrew Gold under the name of Wax in 1987, though as even the chap apeing Stewart and Creme's vocal performances couldn't sing as high as Gold did on the recording, we got a rather a low key version of the song, and it was the only thing that didn't quite sound right. And me an 80s boy too - Valentine Suicide will think there's hope for me yet.

They did I'm Not In Love penultimately, featuring the vocal stylings of the original recordings plus the famous secretarial "big boys don't cry". It was superb. Then the last song was Dreadlock Holiday, with the cheesy but amusing pay-off line "I don't like Hull, I love it" prior to saying goodnight. Naturally they were cheered back on and we got a ten minute version of Rubber Bullets as the encore which brought the house down.

I'm regularly told by people I should have experienced more live music in my life. Maybe this is true. I still doubt I'll attend many gigs in what remains of my existence, but I did enjoy this thoroughly. It's also quite odd to look around the audience of which you are a part, and realise that you're quite possibly the youngest person in it.
Authored by Matthew Rudd
Email ThisBlogThis!Share to TwitterShare to FacebookShare to Pinterest