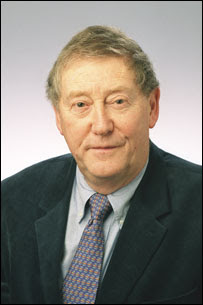 While the expenses scandal is utterly contemptible, it's also very funny. I suspect that Douglas Hogg's moat will probably be the main abiding image of it when it dies down and becomes part of political history.

One exceptional, priceless, jaw-dropping moment came this morning, when Austin Mitchell's wife - whose name escapes me, as she doesn't even use 'Mitchell' in it - tried to implore to Victoria Derbyshire and her 5 Live listeners that, in theory, claiming taxpayers' money for underwear supplies in their second home was not only "within the rules" (the reason, if not an excuse, for all this unseemly behaviour) but also perfectly reasonable.

A specific quote, which was played back delightedly a few times all over the BBC afterwards, went: "You've got to have your Grimsby knickers, and your London knickers, and never the twain shall meet." 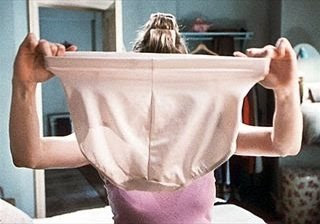 She's not claiming the cost of her pants from the taxpayer, it was just a metaphor for when Menzies Campbell's state-funded bog brushes came under discussion, but nonetheless, just how deluded is this woman? Has she ever visited the planet earth? Is she a rarity, or are they all like this?

In case Austin's missus hasn't already been made aware, you can purchase something called a suitcase, and when you leave London on Fridays to jaunt up to the constituency pad in Lincolnshire, you put a few pairs of undercrackers in there, along with other garments and toiletries. Or maybe she thinks that the type of pants she chooses to protect her modesty when fulfilling consort duties in Grimsby are not suitable when going to balls and functions in the capital.

As a final and not wholly attractive thought, if this lady has her London knickers and her Grimsby knickers, and never the twain shall meet, then what does she wear on journeys between the two? Is she admitting in a roundabout way to going commando? No wonder Austin wears that daffy grin of his so often.

You see, you thought this was going to be a political post of gravitas but no, it's about women's knickers. It's the level where I'm at my happiest.
Authored by Matthew Rudd
Email ThisBlogThis!Share to TwitterShare to FacebookShare to Pinterest

I liked watching Chris Huhne explain that he needed a taxpayer-funded trouser press "because he needed to attend constituency events at which he looked smart", but then that he paid the cash back because the expense claim was "a bit Alan Partridge"

What I find telling is that quite a few of those who have made spurious claims over the last few years have then repaid them within the last few weeks when they got wind that it was all going to come out.

It's a sad time for our democracy.

I've never classed myself as a cynic but, what with the banking fiasco, the e-mail issue at number 10 and now this I have very little respect for any of our so-called leaders, be they business or political.

It is dangerous too; we'll be highly unlikely to believe them when they tell the truth.

The vacancy in our hearts for people that we can look up to is empty.

I wonder who will fill it.