"That was a half volley, you're in goal!" 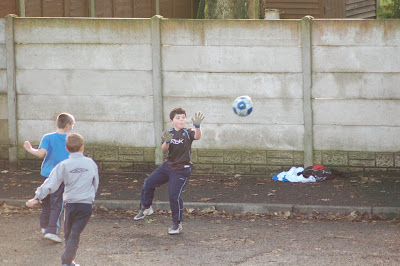 While chasing Basset hounds around the field yesterday, I spotted a group of lads, aged about ten to 15, kicking a ball around. They were clearly playing a game of Headers & Volleys, a game passed down through generations of footy enthusiasts.

I was tempted, briefly, to ape that great scene from This Life where Egg, contemplating his future, sees a bunch of teenagers kicking a ball around on a park and whips off his jacket and tie to join in, thereby producing the epiphany he needed to leave the legal profession behind. The knowledge that a) I had responsibility for some four-legged friends; b) I'm 36 and unfit; and c) some of my village's teenagers may quite possibly be far more unwelcoming than the London kids whose game Egg gatecrashed, combined to stop me.

Headers & Volleys provides a great alternative to a normal kickaround if it's too hot, or you haven't enough players, or you're too boneidle, to run around and play proper football. As few as three players can play, and it's a reasonable test of your technical prowess with a ball, something we're forever told by a despairing Sir Trevor Brooking is, wrongly, not regarded as important compared to the depressing mantras of running around and getting "stuck in".

One player (the weakest) starts in goal, and the others proceed to play the ball around themselves, trying to set up a chance on goal which can only be delivered via a header or volley. If he scores, he gets a point. If the keeper saves, the game goes on. If he misses without goalkeeper intervention (unless the ball hits the goalframe and comes back out), he goes in goal and the keeper becomes an outfield player. And, as extra punishment, he has to go and fetch the ball from the bushes 200 yards away.

There would always be one lad who, horrified at the prospect of being in goal, especially if he was regarded as an outsider in the group, never took a header or volley for fear of missing and then spending the rest of the session in goal as the other lads ganged up on him.

Variations on the rules exist, like in Blackjack, round-the-clock darts or at a pub pool table, depending on where you were from and whether you were hard enough to make up your own rules to suit your abilities.

Other games which involved a football but were not football included:

1 - Kerbie. Two players needed, each standing on opposite kerbs of the cul-de-sac. This was a throwing game, rather than kicking, and each player had to try to aim the ball at their opponents' kerb so that it would bounce back angularly right at them. Extra points were gained if you threw your ball so accurately that it rebounded right back into your grasp without bouncing.

2 - Wembley. One goalkeeper, the rest playing football rules except every player was against each other. Each one who scored would stand behind the goal, having gone through to the next round, and ultimately two players would be left trying to stay in the competition. Once it had whittled down to the two players who would compete in the final, it would be best of three goals.

3 - Every Man For Himself. Similar to the above, except there was no knockout principle. The players would simply compete against each other, scoring goals (and being told not to "scrounge" by standing next to the goalkeeper and waiting to get last touches on someone else's effort) until they all dropped down shattered or, more likely, the breaktime whistle went.

4 - Ballie Wallie (also Wall Ball). At least two players required, along with a handy brick wall of any size. A running order would be established and then each player in turn would have to kick the ball against the wall from any number of impossible angles created by the previous contender's kick. Sometimes this became Advanced Ballie Wallie, whereby you weren't allowed one touch to control the ball prior to kicking. Eventually players would miss and a winner would be declared.

5 - Crossbar. Enjoying a resurgence thanks to Soccer AM's Crossbar Challenge, two players would position themselves either side of the goalposts and try to hit the crossbar with their kicks of the ball. The bar could be struck at any angle - bounce back, underside, clip and over - as long as it was touched. Which, 998 times out of 1000, it wasn't as the lads hadn't been properly coached on the way to get height on a ball.

7 - Rugby. For when the lads decided they want to play rugby but hadn't got the rugby ball out of the garage. A round ball was deemed more than adequate as a replacement, even though grubber kicks became a little easier to judge.
Authored by Matthew Rudd
Email ThisBlogThis!Share to TwitterShare to FacebookShare to Pinterest

Haha this brings it all back!

Headers (or "heiders" round our way) and Volleys was a particular favourite. A similar alternative was Corner Kicks where the heider or volley would be attempted from said set piece.

We used to call Ballie Wallie/Wall Ball "Touchie". We must have played the advanced version because we never allowed any pre-kick control.

The best ones were when you'd belt it as hard as you could against the wall from a particularly acute angle - this meant that you were essentially kicking the ball right the way down the street. It was always a laugh watching the next person try to hit the wall after that - they practically had no chance of success.

Brilliant stuff. I'd always suspected both Headers & Volleys and Kerbie hadn't made it much further than the Wrexham area where I grew up, so it's great to see they'd spanned a much greater surface area. I wonder where these footballing spin-offs actually originated. For the record, we referred to Ballie Wallie/Wall Ball/Touchie as 'lives', where each player got five lives to start with. Meanwhile, local rules for headers and volleys included the primary goalkeeper getting an extra 'life' for having to start in goal, and if the 'keeper caught the ball from a shot without the ball having bounced en route from the striker's foot, the outfield player in question would have to take a turn in goal. That's all before the extra-local chance of 'dog lives' coming into play.

I should probably also admit that I have played headers and volleys as recently as a couple of years ago, on a local playing field, with other grown men on the wrong side of thirty. It's still fun, mind.

I'm now wondering how far afield the tradition of what was termed "Death Square" went. In a nutshell, it was played in as small a square as possible, but generally half a netball/hockey/five-a-side pitch, with as many boys as possible passing the ball around in the square. If you accidentally kicked the ball out of the square, you had to run out of the square in a certain direction. Until you reached the perimeter of the square, EVERY other player was allowed to kick you (from behind only) as hard as they liked. And that was basically it, except that different rules applied to which direction you had to run out of the square in (depending on the locale). Additionally, harsher punishments applied to players allowing themselves to be 'nutmegged' by the ball, such as 'the chicken run' and 'around the world', and it didn't really do to play Death Square against kids from rougher schools, but that's enough about Death Square until someone else chips in.

The "go in goal if keeper catches your non-volley shot" rule existed here too, Mark I'd just forgotten about it. Unlike you, I've probably not played H&V since 1989.

Death Square does sound exclusively Welsh, though, and was probably a handy bit of training for future Cardiff City fans.