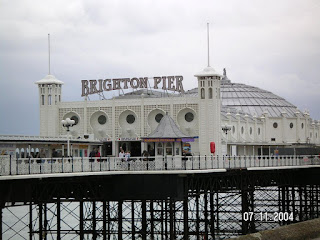 Congratulations to my old mucker Callum, who often signs this blog, and his bride Anna, who got married yesterday. I was privileged to be there for the occasion.

Callum is from Brighton ("Er, Hove actually") and that was precisely where the wedding took place. Never afraid of long journeys, the NB and I set off at 1pm on Friday, hoping with the sort of misplaced optimism reserved for a runner-up on Fame Academy, to be there for roughly 6pm, accounting for comfort stops and the odd jam.

We arrived at just short of 9pm, and this was without a single comfort stop. This was remarkable as the last thing either of us felt as we crawled along the M25 for two solid hours was comfortable. Callum, bless him, felt the need to apologise on behalf of all the south of England when I texted him to let him know the situation.

Nonetheless, we checked into our hotel and had a decent meal and, after a week of breakfast shifts, I was more than ready to fall asleep. The next day was the important one, and what an excellent day it was too.

The one thing you can't organise on your wedding day is, of course, the weather. But by having a summer wedding in Brighton you can at least increase your chances of getting a bit of sunshine so that your make-up doesn't smudge and the photos don't have watermarks on the lenses, and the gathering of guests for post-ceremony champagne isn't done beneath some hastily discovered Alliance & Leicester golf umbrellas. Fortunately, the sun was in a mood to put in double time on the Sussex coast and the day was glorious.

It was a wedding where everyone - bride, groom, bridesmaids - looked radiant and not the slightest bit nervous. Yours truly wore a black suit and shirt and, in order to avoid to Oswald Mosley barbs, rounded it off with a pink tie. I looked okay I think, if on reflection slightly like a waiter in a bar in, well, Brighton. As Callum himself said, Brighton is the easiest place in the world for a Catholic to get married as most of its younger population "isn't the marrying kind", as it were.

The priest was a wannabe comedian, flitting from the serious address and readings to the odd semi-amusing comment about acoustics and, rather deadpanly, ending the ceremony with a chuckaway "Best of luck then." There was one lighter moment - and I do hope Callum and Anna aren't embarrassed by this - when a minor error on the Order of Service sheets meant that half a verse was missing from a hymn, meaning we all felt obliged to hum the melody instead. It sounded, for a few seconds, like Boney M had been hired as the choristers for the day. I wonder if such an occurrence inspired the Crash Test Dummies' writer to pen their most famous hit?

Callum has relatives all over the world and friends all over the country, so a mere trip from Hull (albeit via a long-haul car journey spent shouting at Ford Kas) to Brighton was not even close to representing the longest journey anyone had made to help them celebrate their big day. Callum, in his speech, thanked the people whose trips had been lengthy, adding that people had come from "Belfast, Morecambe, Middlesbrough and Hull - although in the case of the latter, it really should be you who's thanking us." We took the joke well. No, really.

The reception was in a former church and, rather brilliantly, the main meal was cod and chips, served in chippy trays and with champagne buckets containing bottles of vinegar and ketchup brought to each table. Knowing the importance of branded condiments, the vinegar was gratifyingly Sarsons and the ketchup was obviously Heinz, and even came in glass bottles. All this was served with a faux front page of the Brighton Argus as reading matter, detailing Callum and Anna's nuptials under the headline FOR BATTER FOR WORSE.

Their wedding song was Richard Hawley's Tonight The Streets Are Ours, and this was followed by Chas and Dave's Ain't No Pleasing You. Now that is how to start a wedding disco. The dancefloor filled quickly, although when Usher and Rihanna came on, emptied with equal rapidity. It was notable that there was nobody of school age at the wedding at all, and therefore no knee-sliding on the parquet, as is traditional at such events. What the groom and his mates did at midnight after a few extra tequilas I don't know, as we retired to our hotel at about 10.30pm and arrived back in Hull at 3pm today.

Brighton, for what little I saw of it, looks a fantastic place and I'd like to have a holiday there at some point. I'd only ever been once before, and that was for a football match to which I travelled by bus on a dark winter's night. I saw almost entirely nothing of Brighton itself, and even saw Hull City defeated 2-1 in a game made more notable for the self-deprecating Brighton fans who spent the final twenty minutes singing "2-1 to the shirtlifters".

Callum is a BBC journalist and a brilliant one at that, and he and I go back a good few years to when he was an undergraduate hack, training in Preston and doing newsroom shifts in Stockport, among other places. He signs this blog a lot though I suspect that honest modesty may prevent him from doing so this time.

I would like to think, however, that in addition to any other comment you may choose to make, you will wish Callum and Anna well. Knowing him, he is possibly reading this from his iPhone on a Mauritius beach right now when, frankly, a honeymoon should provide many more obvious attractions.

Remarkably, I've now got an evening do for another wedding at Pontefract to get ready for, so best get going. No pink tie this time, I think.

PS - Callum's middle name, as we discovered during the service, is Faramond. It isn't an old maiden name in the family, so his parents really should do some explaining...
Authored by Matthew Rudd
Email ThisBlogThis!Share to TwitterShare to FacebookShare to Pinterest

I went to Brighton last year. It's shit.
http://moderngutnish.blogspot.com/2008/08/brighton-doesnt-rock.html