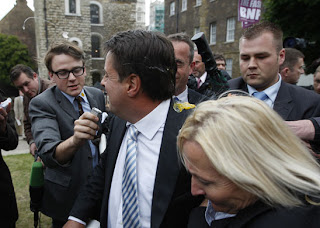 Like most people residing in Yorkshire, I was appalled that my fellow countyfolk had cast enough votes for the BNP to allow one of their kind to sneak into the European Parliament. This is what proportional representation does, you see - it is designed by politicians who, in their quest to self-protect, don't consider (or blinkeredly don't accept) that it allows extremism to beat down democracy's door and take the odd seat.

However, for all the many thousands of reasons that right-thinking people in society should have to despise and scorn the BNP, the actions of those egg-throwers at the Palace of Westminster today were all wrong. Nick Griffin is now, dislike it or not, a democratically-elected politician. He has earned the right, through the (misguided) will of the people in the north west, to speak freely on his policies.

I empathise with the principles of anyone who feels outraged by Griffin's elevation to bonafide political representation. His election in the north west, and that of his colleague on my side of the Pennines, is the sad day for parliamentary politics we all feared but never really expected would come. Election to a few county councils where race issues are more acute than elsewhere holds little impact. Election to the continental parliament, crammed with politicians representing countries and religions which the BNP actively despises, is a frightening possibility that has now developed into reality, although I strongly believe that a good 90% of the people who ticked the BNP box did so to show their disgust at the others, rather than to offer active support to Griffin's band of knucklescrapers. Nonetheless, Griffin is now part of the real world, and for all his party's splinter status, he needs to be accepted as a politician, if not as a worthwhile human being.

But chucking eggs at him in public when he is about to hold a press conference is entirely wrong and dangerous. I'd quite like to hear what he has to say, for the simple and sole reason that the BNP's cause is hindered far more when they open their filthy gobs to the civilised world than it is when they stay silent and talk to their own kind. Preventing Griffin from speaking prevents the rest of us from being allowed to laugh at him, to point out the atrocious prejudices within his words and remind the saner majority of why this man is someone to ignore, or contradict, even pity, because of the hateful garbage he professes to believe.

Extremism is bad on both sides of the political spectrum, and there is little doubt that left-wing extremists were responsible for the protests. While the extreme left fight the extreme right, it's us, the intelligent and staid majority, who are caught in the middle. Free speech has to be more important than anything, and what happened to Griffin was a denial of exactly that. Next time, let him spout his bile, as it will be a far easier way to kick the unspeakable bastard and his mates as far down the political road to nowhere as we can.
Authored by Matthew Rudd
Email ThisBlogThis!Share to TwitterShare to FacebookShare to Pinterest

A couple of points; the BNP got in, not just through proportional representation but because the turn out was so low. Many of those who stayed away would have been mainstream and they stayed away out of disgust over the expenses, allowing the BNP to slip in.

I hope it's a wake up call to those who stayed away.

As for the egg throwing. All that did was give publicity without telling us about the BNP; exactly what they would want AND possibly gained sympathy for them too. None of us likes seeing bullying tactics for that is what the egg throwers were using.

Having the BNP on a larger platform will, hopefully, show them for what they really are.

And if people still vote for them that is the time to get worried.

My late mother would have taken a very dim view. Few things got her as narked as the waste of a good egg. It's the war spirit, y'see.

Once again I return from a week without Internet access and post something on my blog, then look at yours and see you've said the same thing already. More power, etc.

The idea that you shouldn't be egged if you have some degree of political legitimacy is flawed, John Prescott was egged, he was an elected politician too. I also bet you cheered when he was egged.

It's a question of intent. Egging Prescott wasn't an attempt to silence him, merely to humiliate him and get a bit of attention. The problem with the Griffin situation is that the intention is to silence the BNP, and continuing along these lines runs the risk of giving the buggers undeserved sympathy/minor martyr status. Let them speak, then point out the flaws.