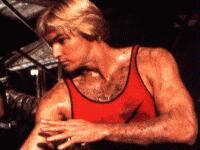 As I racked up yet more miles on the lifeless motorway this morning, Alex was, as ever, my preferred listening. At just after 5am, just as I was dodging Bolton's crafty speed camera system, he played Flash by Queen.

What I've always loved about this song is that it probably went too far in providing a decent complementary soundtrack to a movie, in that the audio clips used tend to pretty much condense the whole plot, leaving 1980 moviegoers with an opportunity to give the thing a miss. Panicky space-related turmoil on news, courageous bloke tries to solve situation, menacing woman villain demands him dead, flighty love interest bird congratulates him on his achievements.

I don't do films at all, so I've no idea if the "fourteen hours to save the earth" was accurate and, subsequently, whether Gordon managed to do the necessary planetary salvage job. I'm guessing he did, as it'd be almost definitely what the script demanded and, let's face it, we're all still here...

I understand the film was cack anyway. I've no idea. I liked the playground version of the song in 1980 though, where you squeezed some kid's hand too tightly while singing "Crush! Aaaargh... you've hurt every one of them...."
Authored by Matthew Rudd
Email ThisBlogThis!Share to TwitterShare to FacebookShare to Pinterest

Here we are, nearly 30 years on, and Brian Blessed still seizes any opportunity to holler "GORDON'S ALIVE" at anyone within range.

See also: Bonnie and Clyde by Georgie Fame which gave away the whole plot of the film in a little over two and a half minutes.

Also Paul Henry's "Benny's Theme" from 1977 which gave away the fact that his girlfriend Maureen was going to die, several weeks before it actually aired on TV.

I think you misunderstand the film's cackness, sir...

(but not a patch on Masters of the Universe)

I very rarely listen to lyrics. They have to be particularly striking to divert me from the melody.