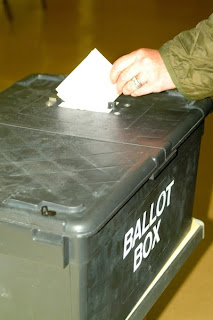 I've just been out to vote in the European elections. Anyone who knows me reasonably well will immediately know which party I've voted for - and, of course, in the Europeans, it is a party, not a candidate, that gets your 'X'.

I did have a good look through the parties on my form though. Aside from the three majors and the known fringe parties, there were also the English Democrats, the Christian Socialists, something called No2EU and, most intriguingly, the Jury Team.

I'd never heard of these, but a quick trip to Google upon returning home shows that they are a coalition party whose platform essentially consists of wanting to clean up the parliamentary systems on the continent and at home. They are, as they claim, a party of independent candidates. Now, surely this is a contradiction in terms? Independent candidates tend to exist because they have a one-issue agenda, or because they genuinely have not enough political principles to align themselves with an existing party, or because they've been kicked out of such a party and are thus standing directly against them in revenge. They have to be individual. It's what independence means, as a definition and as a political viewpoint. The six Jury Team candidates next to the party logo on my ballot sheet might all want to clean up parliament, but they may hold six vastly differing views on education, tax laws, speed cameras, capital punishment et al. That risk is surely too great to convince the public that they are as one?

UKIP was on my ballot sheet, of course. Now, it makes no sense to me that these rabid anti-EU political egos seem so anxious to join the very gravy train that they allegedly despise. Surely their principles should dictate that they stay well away? Irrespective of whether they take the full salary, exploit the allowances and enjoy the other benefits of a seat in the Brussels chamber or not, they really shouldn't be there at all. Maybe it isn't hypocrisy as such, but it's certainly easy to be confused by it. No UKIP or Jury Team person has rat-a-tatted on my door in the last few weeks (nor has any other political candidate, come to think of it) but if they did, I'd have wanted to ask why they wanted to be in a place towards which they were so definitively hostile.

The BNP were there too. Twats. A black friend of mine Twittered this morning that if the BNP really wanted to give him ten grand to go back to his birthplace, he'd be tempted to take it - as he was born in Huddersfield. He only lives 60 miles from there now. Anyone who votes for the BNP is voting for cowardice, prejudice and hate. Those considering a vote their way as a protest against the dishonest shits currently making up our political class should remember the French protest slogan at their presidential elections in 2002: "Vote for the crook, not the fascist." I'd have 646 crooks ahead of one fascist in any parliament that represents me, any day.

I always have the same beef with elections whenever they come round, and irrespective of whether I'm electing my MP, my council or my faceless European representative. To wit, it is branded as a secret ballot but is simply not so. You may take your piece of paper to a three-sided booth and mark your 'X' in fierce privacy, but when you hand your card in, they write the ballot paper number next to your name on the electoral roll, so in theory, they could look at the paper number next to your name and then empty the black box and sift through the papers until yours is found. I find it astonishing that so few people ever bring this up.
Authored by Matthew Rudd
Email ThisBlogThis!Share to TwitterShare to FacebookShare to Pinterest

Some interesting points, Mr. Rudd. I too voted this afternoon - not enough others joining me mind - but that's a different matter.

By the way, "if the BNP really wanted to give him ten grand to go back to his birthplace, he'd be tempted to take it - as he was born in Huddersfield": class.

I've just started a Hull City Blog (hullcityblog.blogspot.com) which is what brings me here - I'm not some stalker, honest. Thought you might be interested.

In the London region, the ballot paper was about two and a half feet long. The local council officials on duty, amusingly, had an official white stick for prodding the papers down into the box.

There were about six independent candidates (I felt desperately sorry for them: what's the point of a total nobody standing in a PR elecion?) Also amusingly, one of them called himself the "Yes2EU" candidate.

There were about a dozen names on my ballot paper, starting with BNP at the top owing to it being in alphabetical order. Longest I've ever had to wade through.

I make no bones about the fact that I went green this time; partly as a protest. They seem responsible unlike the BNP and UKIP as you describe.

I really do think the major parties need a bit of a kicking over the expenses issue though; otherwise they'll get complacent again.

The only way I can do that is through my vote.