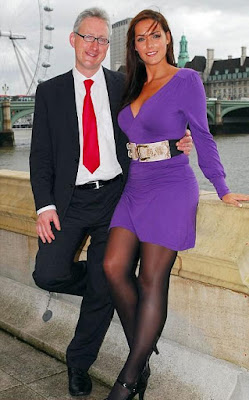 Lembit Öpik MP is getting stick from the sniffier wing of Fleet Street again for daring to snare yet another exciting girlfriend. She's pretty, young, "curvy" (that's sneery tabloid shorthand for "not having her ribs jutting out" - see also "plump") and glamorous.

I'd rather like Öpik, one of the more accessible and switched-on MPs we have, to be left alone but given that he does provoke good copy, it's unlikely. Having already dated a hateful weather presenter and a Cheeky Girl, he's decided again to hook up with someone who, deliberately or otherwise, is going to guarantee him headlines wherever he goes.

Of course, the question being asked is what on earth these women see in Öpik, a man who they claim is not classically good-looking or charismatic and has a lop-sided smile and a mild obsession with asteroid invasions.

Well, maybe he's charming. Generous. Thoughtful. Affectionate. Honest. Sensitive. Maybe he knows how to divide his time properly between the ludicrously busy professional life which comes with being an elected representative and the personal life which can so often suffer. It's all possible, y'know. He doesn't look like George Clooney, but then again neither does the proprietor of the Daily Express, (although he'd probably instruct his journalists to say he does).

Öpik made a bit of a fuss over his expenses claims when a council tax bill wrongly found its way thereon but he is largely a relatable guy who speaks sensibly and legibly. He has an element of personality and profile which the Liberal Democrats need more than ever. For all his obsessive traits, he seems more normal and in touch than most politicians.

The decorative qualities of his partner shouldn't be an issue, but the newspapers choose to make it so. Do they expect all the straight men in politics to be stuffed suits with no public appreciation of the opposite gender?

It's jealousy, of course. Öpik will have at least three high profile partners of pazazz and glamour to store in his memory bank, and his political career will survive, and maybe thrive, for as long as he remains fundamentally likeable. I suspect there are rather a lot of men who work in politics, or work as observers of politics, who would rather like to be him. And I reckon he rather likes being himself too.
Authored by Matthew Rudd
Email ThisBlogThis!Share to TwitterShare to FacebookShare to Pinterest

You've got him about spot on actually Matt. Unsurprisingly, the picture the tabloids paint of Lembit is pretty much unrecognisable. What irritates me, not just with Lembit but with all MP's is that the public accept the dross the Sun et al pump out but never actually look at the real life of their MP. Undermining and trivialising the work of MP's for the price of a chip wrapper is very different to holding them to account, which is what the papers should be be doing.
Oh and I've never once heard him mention asteroids. It's just the kind of nugget lazy researchers pull from the crib sheet to fill inches. Funny how they never mention "former front-bench spokesman on Northern Ireland and Business" isn't it?

Well, it was his belief in a possible asteroid attack that did earn him his initial public profile, but he has certainly moved on from that particular line of concern. As far as I can see, the only thing he has done wrong, ever, is try to argue the toss over his expenses anomaly, even though a bereavement is as "good" a reason as any MP could hope to give.

He's too quirky to be LibDem leader ever, but he may yet be - along with Charles Kennedy - the best known LibDem around. That's an attribute nobody should underestimate.

One of the best theories I ever heard about Lembit Opik's success with women was that, because he has a banana-shaped head, women think that he will give them banana-shaped children, thus ensuring an easy childbirth.

He seems pleasant enough for an MP, actually. But unless he's going out with one of my mates, I don't care a bit who his girlfriend is.

He's a shameless self-publicist. I can't bear him.

He highlights a dilemma.

Yet MPs without that celebrity status are often seen as dull.

They can't win can they.