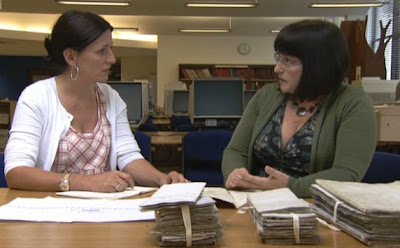 Having missed the first showing last week, I watched the repeat of Davina McCall's appearance on Who Do You Think You Are? last night. I wonder whether it's the sort of programme which will get some of her harshest critics off her back.

Davina isn't perfect, but I've always really liked her. Criticism of her is easy because of the programme she is best known for, but given the vastness, still, of Big Brother, there's no denying it needs a bombastic presenter and Davina does that job tremendously. So she shouts a bit, so what?

Of course, she has had her career mishaps - she struggled at the BRITS, she did a terrible sitcom, she was stitched up over that talk show. Maybe the vehicle for Davina has only ever been reality television, and the original reality show at that. Yet I wonder if executives are looking at her a tad differently after her gentle, amusing and touching trawl through her family history.

I loved her reserved reaction to the idea that she may have Royal connections, treating the idea that a grandfather three times over may have been one of George IV's illegitimate sprogs. She rightly let the rumour die down, as there was no way it could be proved. And yes, the programme is there for people with interesting or controversial family backgrounds (hence the tremendous story of Michael Parkinson, the total arse, saying he was ditched by the show after six weeks because his ancestry was too staid and boring), but Davina's knowledge of this was tempered by a desire to keep her awkward and desperately poignant estrangement from her mother as far away from the show as she could until it was deemed beyond necessary, even eventually admitting that her mum should never have had children. What a terribly sad thing to say.

Her gran was a diamond, and that wonderful second cousin she met in France (showcasing her fluent French on the way) was fantastic. Perhaps in an odd way it shows Davina's genuine appreciation of what's real and what's not - often claimed to be lacking depth when refusing to shed tears with BB housemates who have been on the dreaded "journey"; she reacted to her maternal cousin's hugs and memories with tears that could melt the stoniest of hearts.

Looking at the contributors to this latest series of Who Do You Think You Are?, it would appear that at least one more - Chris Moyles - has an opportunity, planned or otherwise, to show his less boorish side to an audience who just assume he is that loudmouthed Northern ignoramus on a pop breakfast show. He is on this week. I'm interested in David Mitchell's episode too, less so in the others.

Only one thing confused me about Davina - if she didn't speak to her mother for years, and her mother was French, then who on earth is that Home Counties woman she is nattering to about her hair on those glistening Garnier ads?
Authored by Matthew Rudd
Email ThisBlogThis!Share to TwitterShare to FacebookShare to Pinterest

First time I heard about Davina was at university in 1993. She was the midnight VJ on Mtv and my hall mates (one of whom had Sky plumbed into his room) used to stay up 'specially to watch her (or more specifically her chest). I was generally too tired to care.

Like all strong 'in yer face' women she gets attacked in a way that a man with a similar persona wouldn't.

I think 'Who Do You Think You Are?' shows something of 'celebs' that you wouldn't normall see. They have generally been very revealing.

Not surprised at the Parky thing. He seems to get more pompous the older he gets.

Michael Parkinson is a cunt.

You may find this is a commonly-held view in this corner of Blogland...!