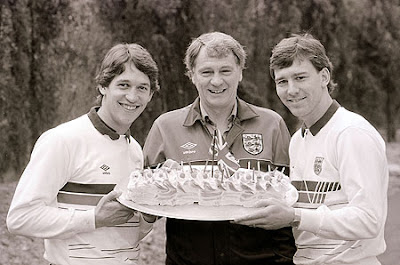 My favourite story about Bobby Robson, one of football's last great gentlemen who passed away today, involves a famous clip of him looking all pondersome and reflective during the 1986 World Cup in Mexico.

England had only taken one point from the opening two group matches and had also lost its first choice midfield pairing to a dodgy shoulder and a bad temper respectively. The manager had been given some vitriolic treatment by our charmlessly impatient press and had some important decisions to make prior to a match that was win or bust.

He had been wandering around the pool at England's base, shirtless, and was then filmed leaning on a rail by the side with his hands over his cheeks and ears, looking deep in thought and as if he were going through acute personal torment. It was as if he was trying to come to terms with the decisions on personnel and tactics for the forthcoming game against Poland which could make or break him in a job he held so proudly.

Much speculation followed about his state of mind as the bit of film was replayed countlessly and analysed by body language boffins and hacks desperately trying to fill space. Look at his expression. That pose with the hands over cheeks and ears shows a man embroiled in turmoil, a man who knew he had to drop certain players in order to rescue England's declining hopes in the tournament. Was he cracking under the strain? Was he losing his bottle? Was he at the end of his tether? Blah blah, and ever more blah blah blah.

It turned out the reason he was adopting such a forlorn pose was because he was trying to listen to his not-very-loud 1980s-style personal stereo without outside interference. His fingers were so placed because he was pushing the cans further againt his ears to get a better sound. In the days when we wore miniature cans which loosely fitted over our ears, rather than either mega cans which enveloped the ears or tiny earphones which fitted right in, it was easy for incidental noise to gatecrash with the listening experience.

His choice of music was Whitney Houston, by the way. As it was 1986 it may well have been How Will I Know or The Greatest Love Of All to which he was tapping his index fingers against his head. Given that he was 53 at the time and Whitney represented what many of his generation would have interpreted as "drug-crazed modern garbage" (about a decade early for Whitney, as it turned out, with the possible exception of the "modern garbage" bit), it was quite a oool choice for a man who loved Nat King Cole and Ella Fitzgerald.

Anyway, he made the necessary tough decisions, England beat Poland 3-0 and ultimately only exited the tournament in the quarter finals thanks to a cocaine-riddled Argentine cheat. That said, Bobby Robson was probably the only anguished Englishman that day who didn't call Diego Maradona that particular word. Such was the man.
Authored by Matthew Rudd
Email ThisBlogThis!Share to TwitterShare to FacebookShare to Pinterest