"Accident blackspot - an x and a dot"

The best skill I possess, which came with qualifications and everything, is shorthand. I have 100 words per minute in Teeline, the requisite speed required to get an NCTJ-accredited qualification in journalism.

Shorthand is fantastically useful and lapsed hacks like me will tell you that it's like riding a bike in that you'll never lose it, even if you give up using it on a daily or regular basis. I doubt I could pass a 100wpm exam now but I do still make notes and jot stuff down with odd scrawls and symbols all the time.

I think most wannabe scribes who enrolled on the NCTJ pre-entry certificate in the 1980s and 1990s were more concerned about the shorthand than they were about any other aspect of the training. We also had to learn writing styles, newsgathering, law and public affairs. At least with each of those we could exercise any natural ability or common knowledge we had already managed to consume. There was no such option with shorthand - unless you'd already learned it.

We had two such people. A Scottish student called Lorna had done PA work and therefore had a 100wpm qualification, while a top chap named Alistair, whom I still see occasionally, had enrolled in a night class while at university in the correct belief that it would give him a head start when he completed his degree and joined the training course. However, both of these estimable student hacks learned Pitman shorthand.

In case you don't know, Pitman is the more arcane shorthand system which works on phonetic sounds and needs lightness of touch, as the same symbol within some Pitman prose can mean one of two things depending on the darkness of the shade. This meant that all Pitman followers needed to use a pencil.

That's all I know about Pitman, simply from watching Lorna and Alistair in action, and therefore I can't say whether the system is easier or not than Teeline, the modern shorthand system which simply uses short symbols representing each letter of the alphabet and you simply connect them up to create words.

The theory is fairly straightforward and once you've learned the alphabet, some basic rules and some cunning groupings, the majority of the course involves practice, practice, practice in order to build up speed. Regularly we'd be given cassettes for our personal stereos (this was 1991, remember) and told to practise with them, while also writing down stuff said on the TV or radio. Soon you'd get to the point where you could be having a conversation and mentally converting what they'd said into bizarre looking squiggles and symbols.

We took exams at 40,50, 60 and 80 wpm to monitor our progress, then came the first big 100wpm exam. In order to give us two opportunities to acquire a qualification, we took RSA 100wpm exams first, then the official NCTJ ones later. Both were as worthy as each other as it was all about speed of pen and nothing else. You'd take a 90wpm test as a warm-up and then the short 100wpm exam (about three minutes worth of carefully-read prose at precisely the required speed), prior to then transcribing your squiggles and smudges back into the original paragraph you'd just heard. If I recall rightly, you passed if you made three or fewer errors.

Shorthand is vital to any journalist, and especially so if you want to work in the print side of the industry. Radio and TV hacks need it less due to their reliance on recording equipment, and indeed the trainee radio hacks down the corridor from us at college needed 80wpm to achieve their qualification. I believe it's down to 60wpm now. Recording equipment is banned in courts of law, inquests and council meetings and therefore the ability to keep up with the proceedings via the use of a pen and notepad is crucial. The transcribing process is so much easier too, with no need to keep stopping and restarting and rewinding and pausing a tape recorder every few seconds.

The best PAs and transcribers can do something like 200wpm, twice the speed I ever managed. Lactic acid build up in the knuckles is commonplace at 100wpm after a while so heaven only knows what it's like for these top line shorthanders.

When I use it now, people are genuinely fascinated by it. If I have a match report to write for one of the online Hull City fanzines, I'll often use my shorthand. On one occasion in the post-match pub, my regular drinking compadres seemed transfixed as I went through the alphabet with them and then wrote their names out in Teeline.

So, with the aid of Paint, here are four of my favourite blogs in their Teeline glory... 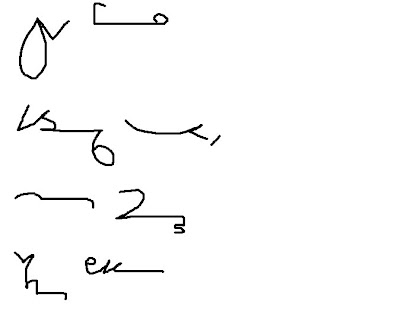 I just showed that to my Mrs, and the only word she could make out was 'working'. i was about to admonish you when she pointed out that was more a reflection of her Teeline skill than yours. So I'll let you off...

When I did the broadcasting equivalent of the NCTJ qualification, shorthand wasn't required (I think it is now) -- which is just daft, as I've spent oodles of time on the phone to people (either pre-interviewing them before a radio appearance, or getting background information) as well as covering court hearings.

My housemate at university was a trainee print journo, so I bought myself a Teeline book and borrowed her tapes for practice. I've got a basic capability without having done the formal tests ever; though I stil have trouble with a lot of words that start with B, P and H.