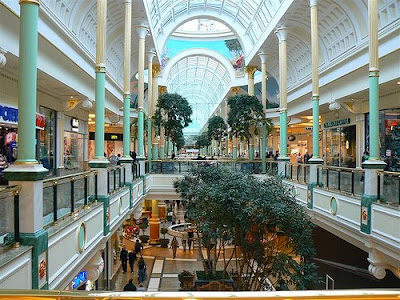 I'm on mid-morning shifts in Bolton this week, so took an opportunity upon exiting the studios to visit the Trafford Centre yesterday afternoon. I needed some jeans and also a new tie for my cousin's wedding this weekend.

I reckon that in the hour or so I spent there, I saw approximately 100 people in Manchester United shirts of varying vintages (the shirts, not the people wearing them - though on reflection it does apply to the people too), and just one in a Manchester City shirt. One.

This seems, at face value at least, to disprove the blue half of Manchester's righteous theory that for all the success of their hated rivals in red, more of the city really is blue when it comes to football.

But hang on here. I must say that a huge majority of these United supporters were of an obvious oriental or subcontinental background, and in the evening United had a friendly against Valencia at Old Trafford. I earwigged a fair few as I stood in queues or glanced at products, and the language(s) they spoke were not English. Also, all this happened between three and four o'clock in the afternoon. So maybe it in fact allows City fans an extra boast - that fans of Manchester City tend to be local and have jobs.

So there we have it, a theory backed by real science, I'm sure you'll agree. Manchester United attract the tourists and the unemployed, and their rivals in blue attract the rest.

To be honest, maybe another reason I saw so few Manchester City shirts is because their fans agree with me that the only place you should ever, ever, ever wear a replica football shirt is when you are attending a football match. At a push, a holiday snap under the beach sign that says TROPIC OF CAPRICORN is acceptable, just so the name and colours of Hartlepool United can be seen and spread in an unusual setting. But replica shirts anywhere else look simply crass.

Incidentally, the Manchester City shirt wearer was definitely Mancunian. He was called Dave (the back of his shirt said so), he was carrying a Parka and he had a chunky gold chain vulgarly hanging over his shirt.
Authored by Matthew Rudd
Email ThisBlogThis!Share to TwitterShare to FacebookShare to Pinterest

Could also be something to do with the Trafford Centre being in the borough of Trafford, where Manchester United play.

City fans are more likely to be found in Manchester...

Are you suggesting that Manchester City fans wouldn't do their shopping at the Trafford Centre?