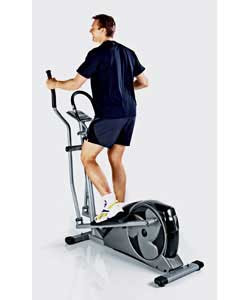 My first ever gym workout has just ended and I'm writing this while in possession of a face of considerable redness.

I quite enjoyed it and found myself wondering, in the absence of expert help and guidance, exactly how long I should carry on for. In the end, I did about 90 minutes on the treadmill, cross trainer and rowing machine before deciding I'd burned off enough. To misquote the kid after his first day at primary school, however, I didn't do enough and I have to go back tomorrow.

Yes, I'm 36 years old and until today, I had never done a proper "health suite" session in my life. All my physical activity as a smaller person took place in the swimming pool, on the badminton court and on the football field. In adult life, I've contented myself with (very) occasional five-a-side football sessions and lots of walking, which is something of a necessity when you have dogs. This kept me in reasonable shape without ever giving me Schwarzenegger's physique, but now it's finally caught up.

Physiologists and medical people generally will know why this is, but somehow it seems spending my entire childhood in the swimming pool, training seven times from Monday to Friday and competing at weekends, seems to have helped me in my adulthood life as I dispensed with heavy, regular exercise. I still have the broad shoulders of a swimmer, but no longer the lithe thighs or bump-free stomach. Very simply, I weigh too much and need to do something about it.

I'm on breakfast shifts this week, so was up at 3am and therefore figured, upon returning home at about 1pm, that the gym would be at its quietest as it isn't open to under 16s and a good number of over 16s would be at work. When I got there, just two people - one male, one female, both a decade and more younger than me - were doing their stuff. Instantly, I felt gravely embarrassed at my lack of tone compared to these two, not to mention my age and inexperience. Nonetheless, I locked up my stuff and headed for the treadmill.

Upon signing up, I'd filled in a medical records form and revealed my weight, and the chap doing the induction course kindly did me a programme to follow. I don't want to build up muscles, just shift two stone and feel fitter, so he did me a programme ultimately aimed at achieving these results. He was being optimistic, to say the least. After warming up on the bike, I managed 25 minutes on the treadmill at the allotted speed but only the first minute - I'm not joking, one poxy minute - used the incline he suggested. After a minute my calf muscles were dialling 999 and I knew, quite simply, that the incline would have to go, or I would. The latter wasn't an option.

The speed walk I then did for 25 minutes was, however, a great success and I sweated and cursed and huffed my way through it, while being forced to watch awful pop videos on 4Music on the screen above me. A girl then came in and set up the treadmill to my left at twice my speed and with lots of incline, and promptly jogged her way through a harsh looking ten minutes without a bead of sweat even dampening her eyebrows. An athlete she was, and an athlete I evidently wasn't, but on I soldiered, determined to be bright red only through exertion and not embarrassment.

Then it was the cross trainer. I'd been told to try eight minutes going forwards and eight minutes backwards. I managed the eight minutes forwards but backwards was harder, not just because my legs were hurting, but because I found the rhythm of it difficult, even though the arm movement on the handles makes it akin to the way limbs combine when on a normal stroll. It was like the aerobic equivalent of head patting, tummy rubbing, and I couldn't do it. But I'll try again tomorrow, and keep trying until I can.

The rowing machine was next, and I loved this and actually really got into it. The 12 minutes I did, at the level suggested, felt good, and for the first time I felt confident enough to do the involuntary exclamations one lets out while timing movements and breathing. However, the stepper machine was a killer. Anybody who has suffered scorched calves (and vertigo) thanks to being in Newcastle United's away end will know what I went through. Imagine going up those many flights of steps again, and again, and again...

I appreciate that most of you reading this will be gym users and therefore I'll hardly be telling you anything new. But for a novice like me, it was far more fun than I expected it to be. I did as much right as I could according to the programme - fluids, cool downs after each stint, stretches - and had a spell on the leg press before returning to the treadmill for a ten-minute flurry, prior to leaving.

There were distractions, of course. A few other people came in during my time there and were extremely impressive and focussed in what they were doing and how they were doing it. A bloke at least 15 years older than me went on the cross trainer and made it look like he was ambling along to the pub. As his legs lurched back and forth smoothly, I felt like the adult ice skater described by The Mary Whitehouse Experience and played by Hugh Dennis, who kept slipping and falling over, hurting his head and cutting himself, prior to giving the hateful look to a seven year old who glides by, "doing it really well".

But I'm a beginner. I intend to continue with this, while also using the pool and rediscovering my training discipline. The fact that I seemed to weigh more as I left than I did upon arrival hasn't put me off at all. Oh no.
Authored by Matthew Rudd
Email ThisBlogThis!Share to TwitterShare to FacebookShare to Pinterest

Good on you. In 48 hours you'll seize up, then you'll feel great, then it'll become part of your life forever and you'll wonder how you ever lived without it.

Don't they say that muscle weighs more than fat, so you were obviously doing it right.

Good luck with it.