No sense left in this vehicle overnight 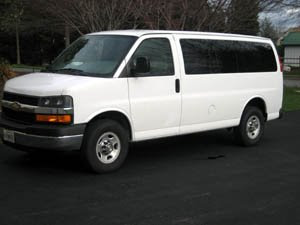 I did something distinctly un-English this morning. I made a complaint.

There was a van with a raving lunatic at the wheel on the motorway today, whizzing and weaving in and out of traffic, cutting people up, overtaking on the inside, not indicating. It's the type that Sarah Kennedy has made a living from whining about.

Anyway, his van had a phone number on the back and a message saying "If this van is being driven dangerously, please call ...". So I did. When finally we veered off in different directions, out came the handsfree and I dialled the number.

The chap at the other end took my complaint but didn't say much. I suspect that message has been on this company's van for years and nobody, befitting our nationality, has ever considered using it for that purpose. That could be because this is the first time any of their drivers has driven like a mentalist, of course, but more likely because most of us tend to stare at our fingernails and declare it all a bit unfortunate.

He may have been in a rush, but it irritates me when drivers in a rush seem to assume that all other vehicles in their way are there just for the hell of it and are fair game because their journey isn't important. I hope this driver gets reprimanded but I suspect he won't. Did I do the right thing? Should we complain more about dangerous or callous behaviour?
Authored by Matthew Rudd
Email ThisBlogThis!Share to TwitterShare to FacebookShare to Pinterest

I've also followed up those 'let us know if you think this van is being driven by a lunatic' stickers, and got a similarly lukewarm response.

Bus companies tend to be more efficient, at least on the surface. Each time I've complained about a bus driver with murderous tendencies, I've had a letter back quite quickly. Of course they may just 'spike' my complaint and award said bus driver a small prize.

I don't complain about trivial things, but when I've seen a bus driver racially abusing a small group of Spanish girls because they were singing, or screaming at a blind pedestrian, I think it's fair enough. And I'm just as inclined to write a letter thanking companies whose staff have given really good or especially thoughtful service, as it happens. So I may be a pedant, but I'm fair.

Something as blatant as you describe, yes, we should complain.

Isn't it part of a national campaign, and they get back to the company once you've made your complaint, so you're not actually complaining to the company itself?

Anyway yes we should complain more or the handcart to hell will come sooner than we think.