She didn't go "Ooooh!" when the starting pistol was fired 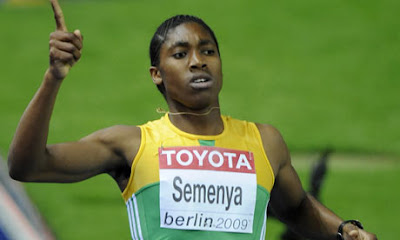 Doesn't the prospect of gender testing sound horrific? And yet that is the indignity that an 18 year old girl from South Africa, who happens to be a naturally gifted athlete, is having to go through in order to prove that she earned her 800m gold medal at the World Championships fair and square.

The IAAF hasn't said outright they think she's a geezer, but they have said she may have "a rare medical condition that gives her an unfair advantage". They may as well have said "we think you're a geezer" after all, for all the difference it makes.

All very worthy of copy and gossip, but the reality for this teenager is rather grim. Caster Semenya is undergoing a gender test right now that involves gynaecological examination, hormone measurement and various question and answer sessions.

What on earth will they ask her in these Q&A sessions? Maybe they'll enquire as to whether she reads on the bog, insists on doing the cooking at barbecues, likes Sex And The City or has ever got lost via her own map reading. If it weren't so tragic, it'd be funny.

Anyway, one hopes that once she has satisfactorily 'passed' her test and gets to bite that slab of gold as an innocent competitor, she sues the IAAF for every penny she can get.

Though gender tests can apply to any athlete at all, in the real world they will only be used to establish whether a person in a women's event is really a woman as there would seem to be no obvious reason for a woman to pretend to be a man in a man's event. The first time I heard of them was when Trivial Pursuit asked the question: Who was the only female competitor at the 1976 Olympic Games in Montreal who did not have to undergo a sex test? I bet you know the answer.* This was, worryingly, at a time, when gender testing was compulsory. The parameters have since been relaxed, and now they only occur following a complaint or via suspicion.

It doesn't help this talented teenager at all, but the only positive thing from all this I can think of is that it will have Harriet Harman hopping mad.

*Princess Anne, because it was felt to be unseemly as she was the daughter of the host country's Head of State.
Authored by Matthew Rudd
Email ThisBlogThis!Share to TwitterShare to FacebookShare to Pinterest