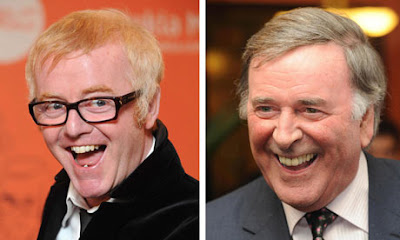 Terry Wogan's leaving Radio 2, then. A great loss to broadcasting, of course, but you'd think from some of the comments left on the BBC's Have Your Say pages that the decision to replace him with Chris Evans was tantamount to appointing Robert Mugabe to the job.

Some people's sense of self-importance really staggers me. Try this, from "Julie"...

Please note that when Chris Evans takes over the Radio 2 breakfast show I will no longer listen. I will switch off or change stations at 7.30am. I currently switch off at 5pm as soon as the Chris Evans Drive time show starts. I do not like the the style of his presentation.

What a pompous piece of crap this woman clearly is.

My main bugbear, however, is how the web people have titled the page.

Should Wogan leave his breakfast show?

This suggests that he is somehow wrong, or unthinking, or disrespectful, for even contemplating the idea of quitting the programme. The man is 71, for heaven's sake. If anyone of that age was still working in most industries then there'd be severe concern for their well-being, so why not for a chap who has had to thrive on the stress of keeping eight million people per day contented on their way to work?

And, licence fee or nay, what the hell has it got to do with any of us? Any of us at all?

Other radio-centric bloggers (and I look to the great James Cridland here) have rightly said, in so many words, that this is a watershed moment for both Radio 2 and its commercial rivals everywhere. When the breakfast show on a major station has telegraphed a change, it allows other stations the notice period involved to look carefully at their own morning acts and make changes or tweaks where they feel necessary. I love Chris Evans as a radio man (he has always been a genius on the radio, while merely being very good on TV) but plenty will not, and so they will use his elevation as an opportunity to see what else is on the dial. This means that all other radio stations should be honing their breakfast time performances to the highest possible level.

Meanwhile, it gives Radio 2 the opportunity, with a younger voice in the morning, to go for a proper head-to-head with Chris Moyles. Wogan has the edge on Moyles but there is the chance with Evans that they could match the shows up, starting at 6.30am instead of 7.30am and making it even more stark a choice for the listening public. The target audiences are different, of course, but Wogan appealed very much to the older audience that, weekends aside, Radio 2 has rightly spent the best part of the last decade trying to shake off. His exit will act as the last rites for the remainder of the "old" Radio 2 audience.

A 6.30am start for Evans would also provide the perfect opportunity for Radio 2 to get shut of the increasingly dangerous and unbalanced Sarah Kennedy, as an added bonus, and allow the early show presenter - currently Alex Lester, of course - a chance to deservedly enhance the reputation that one million overnight listeners have established. Alex is my close friend of course, and therefore I'm biased, but seeing as they've given a proper broadcaster the breakfast show, thereby stalling the recent policy of putting egotistical comics and actors on air without any training at all, they might just choose to do it with other areas of the schedule that require a tweak too.

It's not a greatly-kept secret that Simon Mayo, one of my broadcasting heroes, is set to replace Evans on the drivetime show, which would be a sore loss for 5 Live but, given that the speech network is shifting to Salford but seemingly unable to persuade its biggest names to move there with it, cannot be avoided. Having Mayo, a communicator of wit, subtlety and intellect, back on daytime music radio - hopefully with a continuing dose of Wittertainment on a Friday - would be the best move of them all.

Anyway, if you enjoy a good laugh and a cringe at how awful people are, have a look at the Have Your Say page on the subject of Wogan. Then be thankful you're not like them.
Authored by Matthew Rudd
Email ThisBlogThis!Share to TwitterShare to FacebookShare to Pinterest

Quite right sir. Evans' drive time show is two-hours of sheer joy, and so much different to his old radio 1 breakfast show slot. The way he's clearly mellowed over the years is fascinating - while he's kept his ability to entertain he can now actually interact with listeners. He listens to them now, rather than shouting all over them.
For the people who say they'll switch off, I'm pretty sure the BBC won't mind too much. There comes a time when an audience needs a cull as well as a radio line-up. Sarah Kennedy's listenership need frontal labotomies.

Did anyone consider Mugabe for the gig, or even bother listening to his audition tape?

I can't help but call to mind the days in the mid-90s when Wogan and Evans were head to head in the mornings. Wogan would make continuing disparaging references to the "Ginger Tom" on the other side, whilst Evans in return would habitually take records he hated and have one of his team deliver them to Wogan's studio.

Mugabe's tape was good, but his availability was a bit flaky.

Now then Mr Rudd. You say "Wogan appealed very much to the older audience that, weekends aside, Radio 2 has rightly spent the best part of the last decade trying to shake off. His exit will act as the last rites for the remainder of the "old" Radio 2 audience."

Why is it right that R2 should be trying to shake these people off?

I demand that you withdraw that remark or I will never listen toany of your appalling broadcasts ever again, not that I have since the last time, but you get my drift. Yours sincerely, Doris Bonkers (Miss).

But seriously folks.... I stand by my question.

I bet you complained about Russell Brand didn't you, Dr Nove...?

I'm talking about the (much) older end ... the end that doesn't know what a RAJAR diary is. The end that thought hiring Ed Stewart was tantamount to drug-crazed, permissive society endorsing broadcasting lunacy and should prompt the return of national service and public flogging. The end that thinks replacing the distinguished Sir Terry with absolutely anyone at all represents the end of the bloody world.

I suspect that Wogan's beloved TOGs would frequently turn down a lot of the music he played, and only restore the volume when the man himself reopened his mic.

It's a little known fact that opening the mic in that studio sends a secret signal to the TOGS telling them to resume monitoring.