"I need a moment to reflect, on the friendships I have wrecked..."

Having felt the benefit of my personal music taste as I shift the sweat down the gym, I figured we were long overdue a round of iPod roulette. If you can pinch more than an inch, try these...

1: Somewhere Down The Crazy River - Robbie Robertson
"That voodoo stuff don't do nuthin' for me!" Described accurately by the estimable supply-jock-in-chief Nicky Horne as "a song you would have loved to see being recorded", this is just one big piece of atmospheric narration and sounds great. I know little about Robertson, or whether he is responsible for the contrasting vocals on verse and chorus (deep, Burton-esque narration on the former, pleading melodiousness on the latter) but this song sends the shivers both up and down my spine and I love it.

2: Tomorrow's Just Another Day - Madness
"Some who've closed the door before, say I can't carry on no more..." The whole of Divine Madness is currently on my iPod so it could have been any Madness offering, and I've always thought this was one of their weaker efforts; indeed, when I bought the two initial compilations - Complete and Utter Madness - this was the only one of their singles that didn't register with me. It's fine but still lacks something for me, though has a superb middle eight that offers some salvage. The liner notes on Utter ... were, as I remember, a mini-novel about a bloke having a drink while staring at photos in his wallet and trying to decipher who they were of.

3: We Can Work It Out - Beatles
"Think of what you're saying..." Everyone has a favourite Beatles song, and this one's mine. 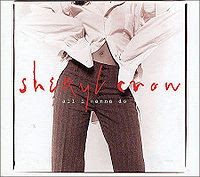 4: All I Wanna Do - Sheryl Crow
"Hit it!" In my early days as a Facebook convert, I happened to put one random early line from this song on my wall, and two female friends promptly alternated between themselves in response to complete the whole song. Most odd. The imagery in this is fabulous, that of lager bottles rotating on the floor and suited men scrubbing their motors when they should be having wraps and coffee. Sheryl Crow has always struck the right note with me, whatever she's done but this busked, improvised song is still arguably her most sublime.

5: I Gave You My Heart (Didn't I) - Hot Chocolate
"Searching and searching, love's always hurting..." Oooooch, where did this come from? This was from 1984 and the band had been irrelevant for a good few years, yet their longevity (and unique statistic next to their name for the 1970s) helps their reputation to this day. Errol was a terrific charismatic presence, of course, but this wasn't one of their better or best known efforts though I do like it enough to have it here. I can't say much more, except that I'd probably flick past it if it came up while milltreading...
Authored by Matthew Rudd
Email ThisBlogThis!Share to TwitterShare to FacebookShare to Pinterest

Listen closely to All I Wanna Do,and it owes a bit to "Stuck In The Middle" by Stealers Wheel...

Great tune,though,and have you ever heard her cover of The Who's "Squeezebox"? It's fab!