And the Brand played on 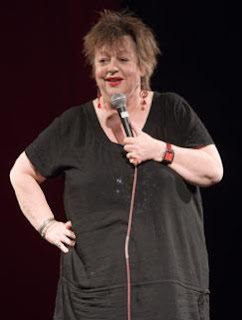 I've just finished reading Jo Brand's autobiography. It's an interesting read but she has made the assumption that we know all about her comedy career upon her elevation to television gigs and so ends the story with her debut appearance on the box.

I was rather looking forward to anecdotes about The Brain Drain, being treated like utter shite by Garry Bushell, Through The Cakehole, being invited on to Question Time to the mega chagrin of the right-wing press and her raucous put-downs to unkind hecklers over the years, but nothing was forthcoming. Aside from a prologue based at a recent Loughborough University gig, her tale starts in 1957 and ends suddenly and promptly in 1988.

This disappoints me mildly, and the fact that I've always found her more interesting than I have funny also means I should have disliked the book a bit. In fact I really enjoyed it, even without any words on her fame. Some of her tales as a teenager who hated being moved schools at the age of 16 are riotous; her relationship with her parents is intriguing (and seems to reach no conclusion, or at least not one she wishes to share with us); and her nursing career also receives much attention.

I think the reason why I never took massively to Jo Brand was that she did seem extremely prejudiced against men. She spent so much of her act monstering the less fair sex while simultaneously bemoaning the fact she couldn't find a husband. To me, this seemed a rather odd contradiction though eventually I did realise this was, of course, the point.

I remember seeing that debut on Friday Night Live in 1988 and being quite frightened of her. Again, I suspect she set out to frighten the audience as much as she could in order to ward off hecklers and also make it clear she appreciated her physical and sartorial flaws. For years we saw her dressed just one way - baggy black T-shirts, baggy black leggings and red Kickers. It was as much her trademark as the weary one-liners and the emphasis on men, cakes and alcohol.

She has softened her image substantially in the last decade - marriage and motherhood presumably helped this - and it does her much credit. She wears more colourful outfits, does more mainstream programmes (she was in Dictionary Corner on Countdown before her imperial phase was over) and has acknowledged the establishment by doing talk shows and daytime telly. I must say I haven't seen her do any stand-up on television for a long time and I'd be interested to see if her material these days has matured with her.

I suppose her showbiz career could be the subject for a sequel to her current tome, though I would doubt it because a) it's called The Autobiography, not The Autobiography Part 1; b) making the public buy two books when the whole shebang could go in one would go against her socialist principles; and c) she regards her last 20 years as far less interesting as her first 30. In my case, she'd be wrong on option c) and I hope we might get a second edition.

Enjoy the debut appearance on television...

I've come to really like the post-'1980s Jo Brand (I thought Cakehole was excellent, but the clip you've included in your post reminds me of why I didn't quite take to her initially.

I think your phrase, "weary one liners," really sums up the style of her delivery in those days. The jokes were *okay*, but it was the way she used to tell 'em.

By the way, the word verification for this comment is butkcom. Oh how we laughed.

I'd have hoped that book would shed light on what it does to your head when you spend over twenty years performing an act, the main thrust of which is ' Look at me, I'm fat and ugly, and I'm going to save you the bother of saying it, now what you gonna do about it?'. Imagine keeping that 'front' of angry self-loathing up for years, and never letting it slip no matter what the idiots in the front row are calling you.

I think that no matter how robust a person she might be, that's got to become incredibly emotionally wearing after a while. Even more so when you reach a certain level of fame and become 'public property'. Just imagine, the 900th time some wag in the street shouts 'Oy, Jo - still fat and ugly, then, darlin'!'. You might just think 'why the hell did I ever start this?' I'm very glad she's got what seems to be a happy home life - it'd be essential.

And I'm afraid I was one of the angry 80s feminists who got a good deal of pleasure out of seeing her lay into men a bit. It felt like we were finally answering back, after decades of misogynist abuse from the likes of Manning and Davidson. Of course I can see now that two wrongs don't make a right... or not very often anyway.

I don't mind her as a person and used to think she was quite funny, though the men thing was wearing but clearly not what she REALLY thought, at least that's what I was telling myself.

But I can't get past the fact that she looks like John Sergeant.

Multiple autobiographies is the way to go - look at Peter Kay, Richard Hammond, even Andrew Collins.

I think the scariest Brand moment I can recall was the Celebrity Fame Academy thing.