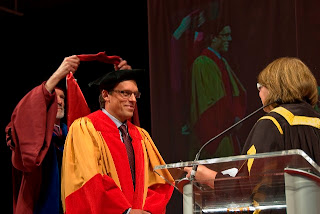 Jack Dee has offered a humble response to the news that Winchester University is to award him an honorary degree. He grew up in Winchester, bummed through school and became a waiter with a drink problem before discovering he could make people laugh. His local university has acknowledged his contribution to the town with a free degree.

I suppose an honorary degree is one of those surefire signs that you've made it in terms of fame, public success or notoriety, like an entry in Who's Who? or a Rear of the Year nomination, or an appearance on A Question Of Sport (all sports stars claim this proves they've done well) or, more generally, Have I Got News For You.

Having not gone to university and almost certainly never likely to, I suppose an honorary doctorate is my only chance of getting letters after my name and a square hat on my head.

So no hope or Bob Hope, then.

Honorary degrees cause controversy, of course. I still can't believe that Robert Mugabe was offered one by the University of Edinburgh, albeit back in 1984 when the idea of Rhodesia being rebranded and de-westernised still sat well with society. Famously, Margaret Thatcher was denied one by Oxford because of spending cuts on higher education, and Jim Hacker was offered one by Baillie College, Oxford in return, unofficially, for reassurances about funding. That last one might not have happened...

Billy Connolly received notice of his honorary doctorate from Glasgow almost to the day that his wife Pamela Stephenson completed years of hard study to get her psychology degree, therefore causing something of a domestic. Again, this may have been embellished to look coincidental in her book about him. Meanwhile, Jeremy Clarkson was attacked by environmental protestors as he posed for the cameras with his award from Brunel University. He reacted sportingly, and said something about "too much sugar", as I recall.

Looking through the history of honorary degrees, they were initially awarded to famous academics, in pre-mass media days when only people with real brains earned any sort of public profile. These days, they go to someone who has achieved something worthwhile or infamous, with or without academic backing, preferably with a connection to the university's city, hence why people who drive cars fast or tell jokes are deemed as worthy of a place in the university gallery as the man who invented the steam engine or the first writer of the English dictionary.

Let the paid columnists moan about this - I'm just interested in what Jack Dee's acceptance speech will be like.
Authored by Matthew Rudd
Email ThisBlogThis!Share to TwitterShare to FacebookShare to Pinterest

Awarded honorary doctorates on the same day as I picked up my BA (Hons) were Jane Horrocks (an undoubtedly significant Lancastrian) and the Chinese ambassador to the UK.

I'm sure this latter award was in no way connected to the millions and millions of yuan spent by Chinese students on course fees, perhaps seduced by impression that they were headed for the other university with the same initials.

Other clues to this? Outside the main building, the university also used to fly its own flag, the Union flag, and the flag of the people's republic...

Honorary degrees are mainly a case of good PR and favour-currying. An institution can say "Look, we're mates with Jack Dee" in its prospectus, and possibly call on him to dish out a few scrolls. Fine and dandy, and good for business, which, let's not forget, universities very much are. The problems start when the celebs use the honorific. See Dr Nigel Kennedy. Ahem.

My old place gave Eric Morecambe an honorary degree. A shame I was 15 years too late to see the ceremony, but the pictures of Eric in cap, gown and skew-whiff specs are priceless. I'm sure Dee will be similarly great value.

Callum - Ha, I was up the M6. No such fun there, but a lot of Chinese students, and a lot of rice cookers being advertised for sale at the end of the academic year.