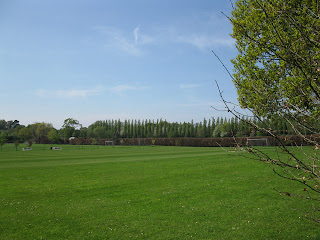 I found out this week that some of the vast, luxuriant playing field area in my small village which I frequent with four Basset hounds every day is to be developed.

I'm a bit sorry about this. The field is huge, containing four full-size football pitches as well as a changing area, concreted central section and a kids' playground. When it isn't dark or school time, there is always a sizeable clutch of kids doing something healthy and fun thereon to pass the time. Teenage lads do what teenage lads should do at leisure time; play football until called in for tea or homework or bed. Younger kids ride mountain bikes on the hilly area or on the specially-constructed grassy ramps for those who prefer a BMX machine. The youngest kids are in the playground area, sliding or see-sawing, with the pre-schoolers regularly taken there during the quiet daytime period by their mums or grandparents. And for what it's worth, these kids all seem good sorts (in an era where we're meant to believe that anyone under the age of 18 is a complete bastard) who say hello, make a fuss the dogs and wait patiently for us to get out of the way before resuming wheelies or keepie-ups.

What I've discovered, having not yet had the time to search for anything official from the local authority, is that a big swathe of football pitch area is to be tarmacked to make more playground room for the infants and, more tellingly, a bigger car park for mums and dads.

It is quite sensible, really. The four football pitches are excellently kept but very rarely have I ever seen four "official" football matches going on. Local teams, of both kids and adults, train there each week and play home matches there on Saturdays and Sundays. But there is always at least one pitch, more often more, that is never in use. Even if it's just scattered groups of lads in jeans and an assortment of replica shirts, they normally only have enough in their ranks to use just one goal.

So on a practical side, it is a good thing. The existing parking area is inadequate when the pitches are used at peak times, so an increase in the number of spaces makes sense. However, I can't help but feel disappointed on a less practical level that replacing natural expanses of grass with stony concrete is just wrong, even if the stony concrete will be far more useful than the patch of green there beforehand.

Two villages away you will find my old secondary school, which in terms of both intake and land, is one of the biggest comprehensives in the country. I have been able to remind myself of just how gigantic the grassy playing areas are as the gym I frequent borders this land and I can see right across it from my position on the treadmill. There are several full-size football and rugby pitches, plus a 400m track (evoking shocking personal memories of school sports days) and areas put aside for hockey and cricket. There is a lot of neutral ground too, making spectatorhood and passage from field to field easy. And yet it is cordoned and fenced off with legal notices everywhere, barred from use by anyone except the kids educated at the school, unless prior permission is obtained.

I hope that the school still has football and rugby teams for every year, like it did during my time there in the 1980s, as the practice sessions and matches would be the only way of justifying the amount of land which is rendered off-limits the rest of the time. The fences weren't up when I was a youngster but we were told in no uncertain terms that use of the fields was disallowed out of school hours unless we had special permission.

Of course, the usual array of irresponsible dog owners (look, just put some cheap bins on the trees and fences, and 99 per cent of dog owners will clean up after their pooches), motorcyclists and general vandals prompted the forced isolation of these fields via the erection of the fences. That's the same everywhere, of course, and my village playing field still has the odd empty lager can and festering turd within view when the first pedestrian of the day takes a morning stroll. But closing such enormous green fields to the public thanks to the actions of a tiny minority has always seemed such a shame to me.

I can't help but think that preserving one enormous area of field which is barely used while building a car park on a smaller but regularly frequented area of field two villages away is somehow wrong. I don't have the clout to argue against either decision, though. I just like vast areas of green grass, be it for Basset walks, football or just because, well, it looks nice.
Authored by Matthew Rudd
Email ThisBlogThis!Share to TwitterShare to FacebookShare to Pinterest