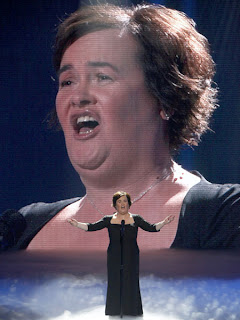 Cheryl Cole and Dannii Minogue are professional singers who didn't hit any branches on the way down from the tree. However, would they rather have the best looks, as they do, or the best voice, as Susan Boyle does? Even though it's a singing business, as Dannii herself likes to say when deciding who to keep in the show, I bet I know how both would answer.
Authored by Matthew Rudd
Email ThisBlogThis!Share to TwitterShare to FacebookShare to Pinterest

Quite frankly, I find all three completely unlistenable.
I wish Wild Horses would drag Boyle away.